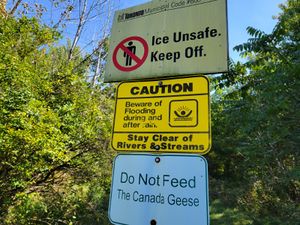 A sidewalk on Alness Street in North York.

I was itching to go on a longish walk and was blessed with an excuse this morning! I headed out, taking the bus to Warden Station, the train to St. George Station, and a different train to Finch West. I was particularly interested in seeing the progress on the new light rail line that they're making there. (Not much was visible, but there was a large crane!)

Finch West is one of the more attractive stations on the Toronto subway system. I had only been there once before, so it was nice to have the opportunity to see it again. Unfortunately, I can't say many good things about its surroundings, which are typical of the area: large parking lots, wide roads, and an urban design seemingly intentionally hostile to the pedestrian experience. But pedestrian I did, making my way up to the hydro corridor (which is Canadian for "the place where the big electric transmission poles go") and using the recreational trail there. The trail parallels the York University Busway, which is a true Bus Rapid Transit road used for express buses.

The trail was basically a straight shot to the hashpoint: just about a kilometer and a half of walking, and I was at Alness Street, where the hashpoint lay a short stroll north. I snapped some pictures and left: a sidewalk in an industrial area isn't the most pleasant place to spend a long time.

Instead of heading back to Finch West Station, I headed east along the hydro corridor towards downtown North York. Along the way, I passed the condo tower where I stayed for my first month in Toronto (in an AirBnB). When I got to Yonge Street I was pretty thirsty so I got some milk tea. I caught the train from North York Centre Station, making a stop in Summerhill to go to the best LCBO location at the old railway station there. Then I went home.