In a park by the Yarra.

Reports are still emerging from this geohash. Stay tuned for updates!

It's been a long five weeks since #51, a nearby hash with Lachie. Crippled with a case of shingles in my left leg, I didn't get on my bike once in the intervening time, limited to short walks or using the car. So, excellent news to discover a hash within my government-mandated exercise distance, and in such a great location: Banyule Flats, just a bit further out than #35.

Government regulations precluded forming a mass posse, and there also wasn't much response to my call-out. I announced my intentions to head off at 12pm, and of course left shortly after 1.

It actually felt pretty comfortable on the bike again. A bit less fit, but not a disaster. I passed a lot of people, the bike paths characteristically choked with people making the most of their limited options for exercise and recreation. I kept an eye out for Lachie's bright orange vest, expecting to see him returning from the hash, which he and Laura had arrived at some time before.

I got slightly lost in the way that happens every time around Banksia Park, where the path forks several times in slightly confusing ways. Rather than admit my error and turn back, I boldly rode across an oval or two, testing the legs through longish grass. 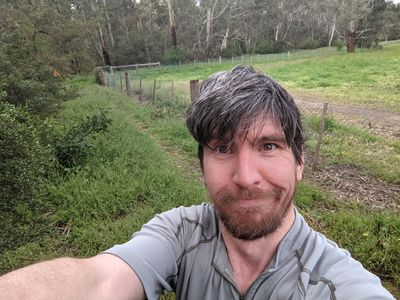 Shortly before the hash I came to a gigantic mud puddle. Three very little boys were splashing about in it. One started kicking water at another. His dad yelled, "Oliver! Oliver!" I could see what was coming. But...no. "Oliver! Move your bike out of the way!" Very kind of you to worry about my progress being impeded by his tiny little bike carelessly hanging over the edge of the little goat track.

Near the hash, I was delighted to see Lachie and Laura still there, perhaps having waited for me. I think this is the first time I've ever been surprised to discover hashers already at the destination.

The joy was mildly tempered by their insistence that I get to the exact spot that their device had recorded as the hash. (My app had already clocked me as having got there...) But it was nice to hang out for a bit, chat about how we each got into cycling, the joys of Glen Waverley etc.

I enjoyed the swampy billabong for a bit, then did some exploring, relishing having found a part of Melbourne within my legal radius with so few people in it.