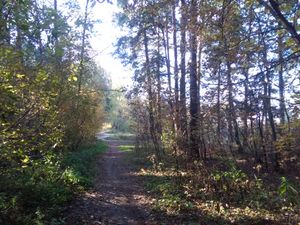 On a forest path near Chernoe (lit. black).

Figured this one would require a fair bit of travel, but fairly reachable otherwise.

This probably was the easiest expedition so far, but still a very enjoyable one. Complete route looks like this: to train station by taxi, to Moscow by train, to different rail station by underground, to Zarya rail station near hash by train, to hash location by foot. Then in inverse order back home. Starting at 6:00 AM.

I've also missed one train to Zarya, but luckily there were two of them just a bit later to keep me on schedule.

After getting off the train on Zarya station (the one near the hash) and getting mandatory barking from local dog, I went around local houses and found hash in its expected location, on a forest path. Took a slightly different route back to station.