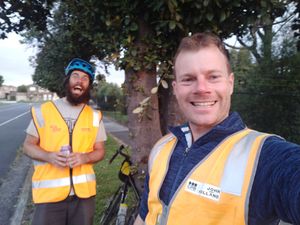 On a nature strip, between the suburbs of Dallas and Broadmeadows.

The first step is the pub. All good geohashings need a proper start and there can be no better start than that of a nice beer at a pub. That's how the four of us, Lachie, Matt, Steve and I began this one.

Beer, bikes. What else? I guess a good route and a way along it. Those we had too - which Lachie had chosen. They were basked in the evening glow of the setting sun. A path that passed along next to the Upfield rail line before being spat off to the west where the hash was situated. A brisk ride along it with some interspersed chatting. That's the way of the hashward bike ride.

Of course, it is often considered a bonus to enjoy the luxury of a rail trail while riding to a geohash. Rail trails aren't just anywhere, you know. Unexpectedly, we had one here. A sign next to a decomposing, compacted earth abutment announced it to us. It was an old military line, servicing a barracks. Weeds and bushes were sprouting from its ill-kempt sides and the bridge was long gone.

Over many a past geohash it has been with some difficulty that the exact point has been reached. Maybe a scramble over a fence here, an scurry through some security gate there. Possibly some barbed wire is involved. It's always a pleasure when the geohash is right on a grassy nature-strip next to a quiet street. As was the case with this one.

The sun was just setting at this point but we had our specially-brought hash-beers with which to enjoy the spectacle. Of course we did our little hash-dance, squeezing the app's proximity to its smallest number. The declarations to our geohashing friends naturally followed - we were pleased with ourselves, after all.

One last effort - to reach home. It's always worth varying the route if this is a possibility, just to explore the area a little. The reader will evince no surprise to learn that this involved more dirt scrambling and not a little temporary fence maneuvering. All part of the geohashing experience, I can hear the reader say with a chuckle.

But has something been forgotten? Of course! The post hash pub. How can hashing satisfaction be fully realised without the beered-up debrief. And for this one, a reunion with our erstwhile hashing companion Matt, newly released from his choir duties, at a pub with his singing mates.

I for one returned home fully satisfied from my geohash outing and would wholeheartedly recommend the experience to anyone.