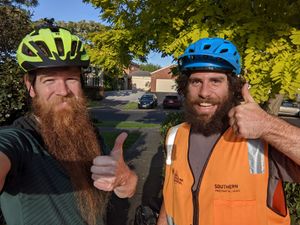 On a residential street in Bundoora.

On Saturday Morning Matt asked "Early morning pre-work jaunt?" for Monday's geohash, Steve said "Uhhh" and silence fell for 34 hours. Matt asked again and we formed a plan to meet up at 6:45am, ride to the hash and make it back in time for work at 9am.

Lachlan left right on time at 6:30am but didn't get far. As he arrived at the new Chemist Warehouse on Maribyrnong Road he was ammused to find the fake hot air balloon on the rood was accompanied by two real hot air ballons. He only missed one cycle of traffic lights taking photos and was back on the road. As he continued the balloons got closer and closer and lower and lower until he had to pull over into Ormond Park to watch them land.

Matt and Lachlan met up only a few minutes later than planned and rode up the St. Georges Road Bike Trail and then down to Darebin Creek. They briefly got a little lost and made a few wrong turns while trying to cross the Western Ring road because Lachlan was distracted by bragging about how good his GPS was and how it made navigation so much easier.

A few hundred metres up the road we found the Geohash amongst some plants on the nature strip.

They opted to take a different route home and headed west along The Ring Road bike path and then inadvertantly north up the Galada Tamboore Pathway. A u-turn and 5km of backtracking go us back on The Ring Road which took us to the Upfield Line. When they reached the Upfield line they chose the gravel service road along the train line rather than the miserable Sydney Road. It's a delightful short cut that is worth using again whenever in the area, but it's not for skinny tyres. From Gowrie onward it was smooth sailing, especially through Coburg where the bike path has been recently upgraded with a glorious skyrail above and new park land all around.

A quick coffee at a cafe in Brunswick and then off to work.