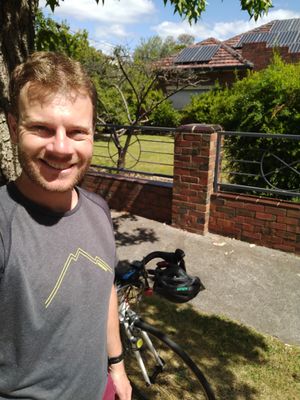 In the front yard of a house in Balwyn.

Today was my last day at work before the Christmas break and I knew I had to go out with a bang (i.e. geohash). After working through the morning from home I jumped on my bike and rode off to the Auburn Hotel (formerly Geebung Hotel, named after a Banjo Patterson poem - I don't approve of the rename). Here were my work break-up lunch and drinks.

After an hour of shmoozing and boozing (1 pint) I bid farewell, got back on my bike and rode off towards the hash - coincidentally only a couple of kilometres away. The sun had come out and my nicely tuned road bike got me over the hills with ease.

I arrived at the hash-street, shaded with trees in a quiet, residential area. The street was made of concrete rather than asphalt, which I think might almost qualify me for a 'We Built This City' award by descent since my family used to always boast of how my great-grandpa was supposedly famous for having introduced the concrete streets into this area when he was the council's chief engineer back in the 1950s or sometime.

Anyway, I could see that the hash was about 10m into the property. So I carefully unlatched the gate and walked in. If I was caught I was going to say that I was looking for number 28 or something feasible and get out. After all, there's no trespassing before you're asked to leave (how would people deliver things?).

I managed to get right down to less than 1 metre, always my goal (I call 5 metres a success). It was basically right where that bin-lean was happening in the photo below. I should have taken a selfie at the spot but I was too keen to get back onto public land.

I took some photos with my bike on the footpath and rode home via the Yarra bike path and old Chandler Hwy bridge. Too easy.

Unfortunately, I forgot to unpause my GPS watch after the pub which explains the straight, diagonal line.