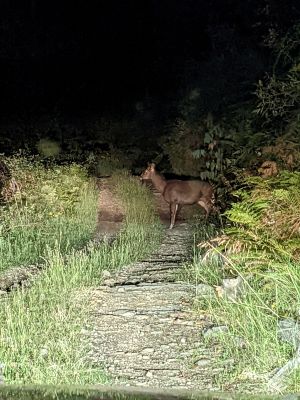 A deer on the road.

Near a 4WD track east of Mt Feathertop.

Dave and I were staying in Tawonga South with our young families for a bit of a holiday, trying to mind our own business and keep the kids happy and entertained. However, we were alerted to an impending disaster: our geohashing group had amassed a streak of hashes, and were attempting to turn it into a record. However, the only possibly attainable hash for the day was too far from any of the members of the group... except us.

Despite believing that the hash was likely unattainable, we could not just let the call fall on deaf ears, so once the kids were in bed, Dave and I loaded up the car with plenty of water, some snacks, a map, plenty of lighting (mostly bike lights), and a dose of optimism, and headed off.

We knew that the hash was quite high up in the alps, and that the only viable route was via a local bitumen road which became a good gravel road and then a collection of increasingly questionable logging roads. If we could manage to drive my soft-road plug-in hybrid 4WD up them, and if there were not too many unassailable objects, it might be possible to reach the hash and get home before midnight.

As we rose up the side of the valley in the failing light, we could begin to see grand vistas over the town below. The bush was quite magnificent, and we started to get our hopes up as the roads turned out to be quite good. Just after we saw a scared and dark (almost black) wallaby off the road, we reached an intersection and managed to take a wrong turn. We realised a few minutes later, and managed to pull about a 9-point turn on the narrow track and head back to the intersection. The reason we'd missed it was that the correct road was actually about a 330 degree turn and headed up really quite steeply.

We drove on up over a rise, and found a thick tree that had obviously been chain-sawed by some four-wheel-drivers who were obviously much better prepared than us. We rose up over an increasingly rough track, that was beginning to show some very large rocks in the middle of it (foreshadowing) and some increasingly deep ruts across it. Coming round a steep bend we slammed on the brakes as we came face-to-face with a large deer (see photo), the first I'd ever seen in this part of the Alps. It didn't seem too concerned and eventually ambled back into the bush.

With our nerves slowly fraying, we managed to push on without doing any damage to the car, until we reached a deep rut filled with mud (see photo). With our hopes almost dashed, we jumped out of the car and began poking around with some sticks to see if we could find a way that was solid enough to get across without getting stuck. We walked along the track for a while discussing whether it would be fair for us to attempt the crossing with the risk of being stuck deep in the bush, putting the burden on our young families to interrupt their holidays and organise some kind of rescue for us in the morning. We eventually agreed that it would not.

We returned to the car, executed another 9-point turn on the narrow track and began to retrace our tracks back out, this time hitting the underside of the car on the big rock (thankfully very slowly, only adding a scratch to the bottom of the traction battery housing which seems to be OK so far), and scrunching the tow bar (thankfully with no tongue installed) on the sides of some of the deeper ditches which ran across the road. On our way out, we startled a couple of rabbits and two more big deer before we made it back onto the good roads and safely back to the house.