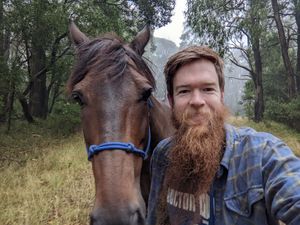 Matt and Reggie at the hash.

In a pine forest near Coalville.

We all know that if you want to get someone else into geohashing, best not to start with something completely out of their comfort zone. So I'd been looking out for some time for a hash that would suit Reggie's ability, since I thought it was about time I introduced the sport to him.

This one looked perfect. I went to tell Reg the good news. Like many, I don't think he really understood the point of geohashing, but he seemed keen to go on an adventure anyway. He doesn't have a bike, so I said I'd drive us up to the forest, and we could walk from there. He thought that sounded ok, so off we went.

The hash was not far off the side of a fire trail, so it was a very easy approach, though the surface was quite rocky in places, but it didn't seem to bother either of us. But as we got closer to the hash, I realised it was maybe 10 metres off into the dense forest. I was keen, but Reg thought he'd better stay on the path.

I left Reg there and bashed into the forest. I had hardly gone out of sight when I heard him calling for me. I shouted back to let him know I wouldn't be long. Grabbing the coordinates I wove my way out again to Reg's relief. I'd forgotten to take a selfie at the actual coordinates but I took one there on the path, it'll have to do.

We walked back up the trail and back to the car. Reg was keen to head off in another direction to see if there was another geohash, but I had to explain it didn't work like that. We'd have to wait for our next lucky day! I could tell he was disappointed as we headed for home. I think he's got the geohasing bug!