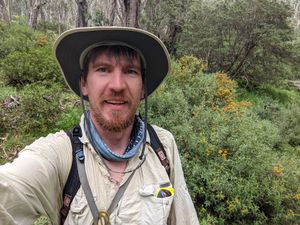 In the bush near Craig's Hut.

After a 6 day bushwalk around the Bluff, Mt Howitt and the Crosscut Saw, Ellen and I were all set to return to Melbourne. We had an amazing swim at a beautiful waterhole, and then, to shorten the drive home the next day, drove a few kilometres up the windy, dirt Circuit Road to the Howqua Gap hut, where we were serenaded by the not-distant-enough howling of wild dogs, while we frantically googled to find out whether they are known to attack hikers in this area (yes) and if so, whether they are known to enter tents (also yes), whether hiking poles make effective weapons against them (no) and did not sleep terribly well after this research.

So our plans were to have a nice relaxing lie in, then lazily make our way back to Melbourne, possibly via a bakery or two. But then I checked the geohash.

The point lay near two of the interesting features in the area, Craigs Hut, and the Monument, just the other side of Mt Stirling from where we were. In our pre-hike warm-up daywalks, we'd walked up to Mt Stirling, and had seriously considered getting out to Craig's Hut and the Monument, but didn't quite squeeze it in.

How convenient. Or, if you were a tired, scratched-up, bruised, grumpy, poorly-slept geohasher's partner, how decidely inconvenient.

Option 0: if we'd had a four-wheel drive car, we'd drive directly along the track we were currently on, in a very direct path to the hash, and bush-bash the last bit. Alas.

Option 1: Use our legs as a four-wheel drive, walking along Howqua Gap Trail, over Mt Stirling, then along Clear Hills Track, then walk along Monument Walking Track and bush-bash. On the downside, that's nearly 8km each way. A great day walk if you're fit and fresh and looking for exercise, but in our current condition, not so much.

Option 2: Drive a short distance back the way we came, to the bottom of Monument Track, then hike up that, joining the walking track then bush bashing. About 3.7km each way, but sadly, with a huge climb.

Option 3: Drive all the way to the start of the 4wd track into Craigs Hut, walk in (2km), then the Monument walking track as above.

We went with option 3. The saddest part was undoing all the driving we had tried to "save" the previous day. Ellen agreed to come and wait in the hut, and we'd lunch together afterwards. 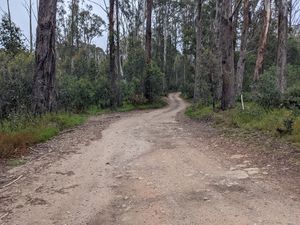 The road was very windy and bumpy, but in pretty good condition. There's a walking track from Circuit Road into Craig's Hut, but we didn't know anything about it, and had had bad experiences with walking paths recently, so went with the safe option of following the 4wd track instead.

Just as we headed in, a man in a four wheel drive rolled up and stopped at the sign labelled "CRAIGS HUT >". He asked if it was the way to Craig's Hut. I said it was. He asked again. I confirmed again. He hesitated, then thanked me. Some 20 minutes later, he passed us as we walked in, on that same track. I really can't help but wonder what he was doing during that time - getting a third opinion? 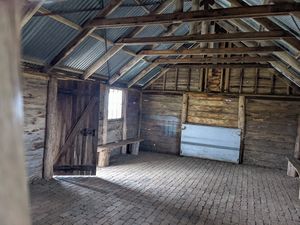 Before long, we arrived at Craig's Hut, memorably described somewhere as a "replica of a fake hut". If you think that makes no sense, consider its history. A hut was first constructed on that site for the filming of the Man From Snowy River, in 1982. It burnt down in 2006. In 2008, it was reconstructed. However, having seen quite a few high country huts, I have to say, it's pretty fake - none of them have had windows, or brick floors. It feels more like an imagined homestead. But the scenery is utterly gorgeous, except for days like this one, heavily overcast and a bit foggy. 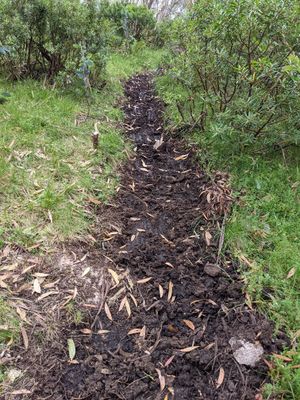 Put off by the thought of hanging around a tourist site with a bunch of tourists, Ellen decided to come with. We soon found the Monument Walking Track, which turned out to be a rather curious muddy trail clearly predominantly used by horses. On the steep bits, it had the horse equivalent of corrugations - a kind of step pattern caused by each horse sliding in the mud until it found the point where the other horses had stopped sliding. I can't wait to tag it "highway=bridleway" in OpenStreetMap. I don't get to use that one much. 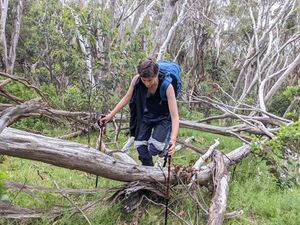 Onto the bush-bashing, around 350m from the point. The map showed the point in between two gullies - Gorge Creek and its unnamed companion. From experience, crossing gullies makes for bad bush bashing, so we planned to aim high, above the gully, before descending. We didn't aim quite high enough, and had to do a bit of clumsy climbing and traversing.

At first, the terrain was, as it always is, pleasantly inviting: widely spaced trees with no understory, and just a couple of small fallen logs as obstacles. But, oh, how things changed. 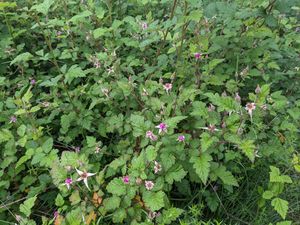 As we descended the spur between the gullies, things got harder. Patches of sword grass, small bushes, and the dreaded native raspberry - a very prickly blackberry-like bush we'd had traumatic encounters with the previous day. And in places, dozens of trees had come down in some storm, creating a complicated obstacle course of logs at all heights. Sometimes you'd have to cross one at knee height, swing under one at shoulder height, then clamber onto another at waist height while avoiding prickles beneath.

As we got to about 180m, Ellen's boots, and their wearer collectively decided it was time to stop. After much over-complicated negotiation over how to find each other again, and what various numbers of whistle blasts meant, and who should carry the whistle, I clomped off down the hill alone. I now had to plough straight through the biggest prickle bush so far, keeping my screams silent so as not to upset my patiently waiting companion. I yelled out my progress: "eighty...oof....ouch...sixty...fuck...FUCK...forty...shit-GAH...twenty...".

At this point I entered a deep thicket of a bush I've seen everwhere in this region, but don't know the name of. It has yellow flowers. I was surprised, because geohashes that require bush bashing always finish in a clearing. Why would they put the point in the scrub itself? That's just mean.

But just at that point, I popped out into a clearing (faith restored!), and quickly hit the point. "SUCCESS!"

I clamberd back up, a better way (fewer prickles), and we made our way back to the hut picnic area for a hot lunch. I briefly tried to get to the Monument itself, but the lack of path directly to it, and the visible dense regrowth meant I didn't get far - something tells me it's just a disappointment in hill form. But we had dinner and a beer in the beer garden at the Country Club Hotel in Yea, and that wasn't disappointing at all.