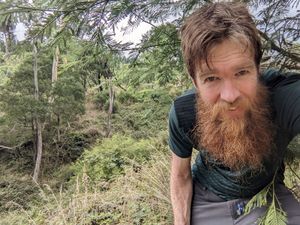 In very scrubby plantation forest in the hills above Morwell and Traralgon.

The Tyers River downstream of Moondarra Dam, provides some stunning scenery for walkers, kayakers, and cyclists. I had spent some time walking the Wirilda track only a couple of weeks ago. It edges along the side of the river (and requires some deft footwork for the occasional crossing) before climbing up and joining an access track on the top of the ridge. It was broadly agreed that the access track portion would've been much more enjoyable on two wheels, and made some vague commitments to return in that fashion.

So when I learned that my route to the 2022-02-18 hash could take in part of the Tyers Gorge track, I was keen to hit the road, but it wasn't until afternoon that I could head out; fortunately the scattered showers had worn themselves out by then, and the raincoat I had packed was not necessary.

It was a pleasant ride. Undulating - but generally climbing - through rural housing, then farmland, then forestry, until I found myself in the state park joining the track I'd walked on only a few weeks prior. (It follows, in parts, the Tyers River Conduit, which supplies water from the Moondarra Reservoir to the Latrobe Valley.) As we had suspected when walking it, it was indeed much nicer on wheels, climbing up the side of the gorge and up to the ridgetop, before eventually exiting the park on the Tyers-Walhalla road.

But not for long - a hundred metres down the road and I was off it again, this time onto a forestry road that took me down into steadily thickening bush. I was growing nervous; the hash was imminent, and if the vegetation didn't thin out, there was no way I'd be able to reach it.

Finally, I was as far as my bike would take me - the rest would have to be on foot. I surveyed the bush before me, and fought back despair. Thick patches of blackberry - impenetrable. But I could go round, if I could somehow get through that hedgy-shrubby mess of trees, while scrambling up a steep slope...

I changed into some firmer footwear and headed in. A brute force approach was surprisingly effective, and I found myself making some progress, though slow, by breaking the multitude of branches that I couldn't weave between or around. After a few minutes I broke through into a clearing, but my relief was short-lived, another thicket awaited me.

This continued for some time, fighting through to clearing after clearing until I finally broke out into a larger grassy area. I made faster progress now, and soon zeroed in on the hash point, which was oh so close to being inaccessible: it was right on the edge of an impenetrable blackberry patch.

By the time I'd retraced my steps back to my bike I'd been going almost an hour. And I'd gone about 400m.

Back on the bike, I continued on. I was headed to Morwell but I missed a turnoff and was well on my way to Traralgon by the time I realised. I checked the timetable - there was a train leaving Traralgon in 27 minutes, but google said I was 35 minutes away - but I could make it!

Oh no I couldn't. Emerging from the trees I realised why I'd enjoyed my outbound ride so much. There was a brisk sou-westerly, and Traralgon was a bit sou and a bit west - I'd have a headwind all the way. I pushed as hard as I could, but the harder I pushed the harder it blew, so I missed the train by a few minutes.

But - not all bad. Rhonda came to pick me up - I didn't fancy another couple of hours of that headwind - and it was a perfect excuse for a lovely night out at one of the nicest restaurants in the valley - so a good result really!