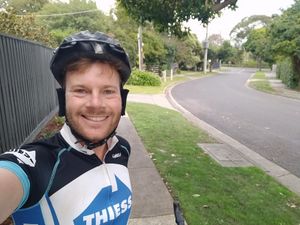 On a steep footpath in Boronia.

Neat little hash this one. I woke up to Stevage's message in the group chat saying the hash was in Boronia. I had a look and it was also accessible, just on a footpath. So I got ready and headed off on my bike.

Using my road bike for maximum speed I hurled myself towards the Eastern Suburbs. I took a lot of roads rather than the more salubrious Koonung Trail and negotiated a few diagonals to take advantage of the hypotenuses.

And soon I was screaming down the last hill, battling the irritatingly long traffic sequence at the Dorset Rd/Boronia Rd intersection and then onto the residential streets to the hash. I overshot slightly since I was focused on climbing the pretty-steep street, but then turned around and almost immediately hit the jackpot with the hash.

I took some photos and returned on the train.