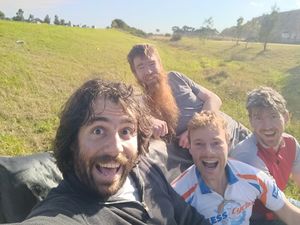 In a ditch between the Dingley Bypass and a bike path.

Expedition, as told by Steve

An attempt to turn vague statements of interest into firm plans the night before the hash coming to nothing, I slept fitfully, unresolved dreams and nightmares of geohash successes and failures floating round and round, until I woke up. I immediately checked my phone, and discovered that Felix and Lachie had launched an expedition, and I had 4 minutes to meet them somewhere to be part of it.

Immediately and decisively I decided that I wasn't sure, but that some quick breakfast would help me make a decision whether to try to get on board with the departing adventure wagon. A quick visit to the backyard revealed glorious sunshine that all but required a geohash expedition. I was in!

I bought some time by suggesting they visit me at my new home, while frantically making coffee between spoonfuls of cereal, and wondering if I could figure out where all my necessary bike riding adventure bits were. Turns out I could. Although there was a brief moment where it looked like I was going to be channelling mid 2010s era training-Steve with long lycra bib shorts and two mismatched gloves.

I threw open the curtains to discover my hashmates had already penetrated my perimeter fence and were within my tiny front garden. I invited them inside, but Lachie, out of respect for my floorboards and his own shoe-removing laziness remained to further contemplate the few square metres of faux nature. Well, I assume. Maybe he was doing the Wordle.

After the briefest of tours, we departed. I educated my companions on the ways of the Brunswick Shimmy, and soon we found ourselves in familiar territory, down Canning St, through the city, and out along bike path. Felix warned that he had to catch a certain train in order to be back on time for an appointment, which Lachie and I both interpreted to mean he was intending to ditch us and make a sprint for the geohash if need be. But we underestimated his gallantry, and willingness to possibly forgo the geohash in favour of hanging out with us as long as possible. Sorry, Felix. 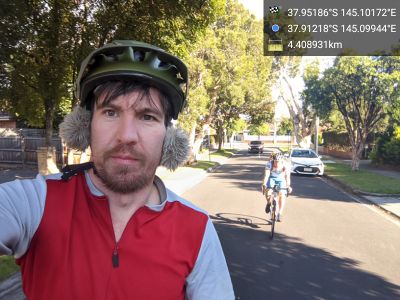 Action shot, riding through back streets of Oakleigh.

It's amazing how much newness there is almost anywhere near a train line in Melbourne. New bike path along the Gardiners Creek Trail, amazing new Djerring Trail under the Skyrail of the Pakenham Line. We chatted about typical geohash stuff, letting Lachie take care of the navigation until...hang on, why are we going west? The hash is southeast of here. Engage criticism mode! Criticism mode engaged. "Lachie!"

Before long we were on the right bike path and honing in on the spot. Felix let slip that he could see Matt on his GoogleStalk, so it wasn't a total surprise to see him at the hash. No surprise at all, really. But I tried to act surprised. Hi Matt!

The hash was a delightfully boggy ditch beside a busy freeway. I took off my shoes and socks and ploughed through, while the others tried to find a dry path. 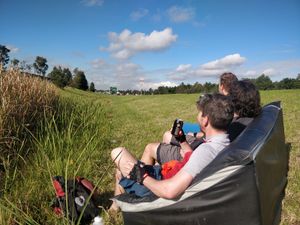 Even more delightful was the discovery of an upside down couch just a few metres away, which was in surprisingly good condition (considering its likely history of being ejected from a truck at 100 km/h) and easy to move to the hash. Is it a couch potato award if you find a couch at the hash? Probably not, but it's still a comfortable, if silly place to sit and have a few beers in full view of thousands of your fellow Melburnians.

We then headed back to Huntingdale Station, losing Felix while I persuaded the other two to join me on bike paths all the way back to my place. Gorgeous day out, so much nature, such green. Delight.