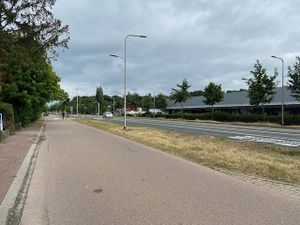 Next to the Utrechtseweg in De Bilt.

I was planning to make a cycling trip anyway, so when the hash showed up as being on the grass between the road and the adjacent cycling path I decided to go for it. Planned a route from Zeist, via De Bilt to Utrecht which would take me past the hash point.

Everything went as planned, although a bit more rainy than the forecast had shown.