This achievement was proposed in the past, but has been rejected, because it is already an achievement in the form of the Border Hash. Please read the discussion page for more details.

For instance, the geohasher is: 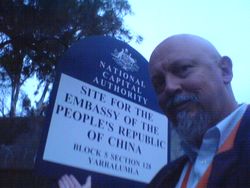 Picture to substantiate claim to have reached a "Foreign Embassy" geohash.

Generally, the picture should substantiate the requirements, if at all possible. An example would be as shown in the image here.

Would be the usual requirement of reaching the coordinates within accuracy requirements, and taking one or more pictures on location, in a way that is substantiating the claim.

Retrieved from "https://geohashing.site/index.php?title=Foreign_achievement&oldid=770903"
Category:
This page was last edited on 20 December 2020, at 18:42.
Privacy policy
About Geohashing
Disclaimers