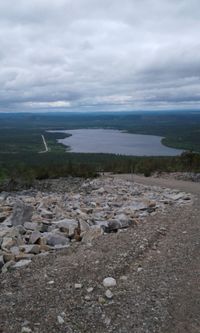 This graticule is located at 67,27. Today's location

The Pyhäjärvi graticule has been named after a lake of the same name. Half of the Pyhä-Luosto National Park (http://www.luontoon.fi/pyhaluosto) founded in 2005, is located in this graticule. The other half is in the Sodankylä graticule. Most of this graticule is part of the Pelkosenniemi municipality, which has unique Laplandic nature – an infinity of swamps, the golden surge of river Kemijoki, the force of river Kitinen and the soft song of river Luiro.

Retrieved from "https://geohashing.site/index.php?title=Pyhäjärvi,_Finland&oldid=260667"
Categories:
This page was last edited on 6 September 2018, at 17:56.
Privacy policy
About Geohashing
Disclaimers