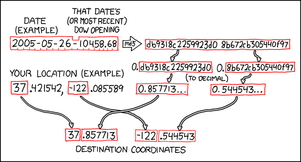 This time, we did invent the algorithm!

You don't have to understand this to be able to geohash.

There are a number of results of the application of the algorithm that may not be immediately apparent, but which make for interesting thought experiments and even more interesting achievements under increasingly bizarre or adventurous scenarios.

Q: I tried to use the md5sum from my unix/linux command line and the hash was not the same as the comic. What is the correct command line?

Several known issues are presented at Known Issues. There is an ongoing discussion on these and other issues at Talk:Main Page. 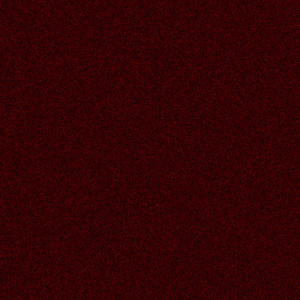 Some people have questioned the algorithm's randomness. To analyze this issue, a tiny python program was written that uses The Algorithm to fire at a window's canvas marking pixels red. Here is the result: The background is black, a pixel becomes brighter the more often it is hit. If you can see any regularity or a pattern, please watch A Beautiful Mind and check yourself into an appropriate facility.

Retrieved from "https://geohashing.site/index.php?title=The_Algorithm&oldid=764954"
Categories:
This page was last edited on 4 October 2020, at 13:24.
Privacy policy
About Geohashing
Disclaimers