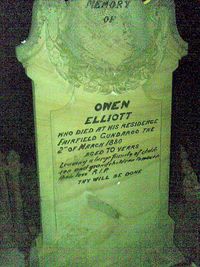 A successful Canberra geohash! What a day! At around 4:30 gim and Alvin made it to within 100 metres of the hash, which turned out to be in a paddock about 800 metres south east of the cemetery in Gundaroo. As the exact location was a little uncertain, and animal related injuries were conjectured, they headed back.

At four thirty it must have seemed that no one else would show at the hash site, but these intrepid adventurers didn't count on one thing, the sheer disorganisation of another Canberra group. Oh yes, Canberrans made it to the hash site, at 5:30pm, after plenty of f-cking around!

Of cow pats and paddocks

After a haphazard start Alvin and gim were running slightly late for the half hour trip up to Gundaroo. Compounding the late start was the maiden voyage of gim's wife's mobile / GPS doohickey. After some minor teething problems, mainly consisting of neglecting aforementioned device's directions, they were on their way up the federal highway.

All went well through to Gundaroo. Minor debate was had after encountering a cemetery, non-existant road, and signs prohibiting further vehicular progress.

Further progress was made on foot. After a few hundred aimless metres of wandering the existence of an 'on foot' mode of GPS navigation was discovered. A few couples walking their dogs were sighted in the distance but we questioned whether they were suitably armed for locating coordinates without suitable location markers.

Access was rather easy going in the fading daylight, mainly requiring maneuvers around cow pats. After running into and following a set of double fences for a distance we came to the closest point that was accessible without venturing into private property. As the gate was locked and debate surrounded the reasons for said lock and fencing it was decided that this was as close as we were going to get today.

We scanned the general area for fans of a certain web comic but as we thought we were a little late, perhaps around 30-45 minutes, we thought that anyone else that arrived would have left by now; or that others would be on the other side of the paddock, behind a bit of a rise and trees. With the bulk of our mission accomplished we sat down to consume some well planned G&T while recording the occasion.

A group of shady characters (see the story below)

The trip, a Cemetery, Fences, and the Hash

We drove from before sunset (just after 4:30) to twilight to get to the town nearest the geohash. Psud couldn't get it straight whether it was Gundaroo, or the neighboring village Gunning. He settled on a cover story of "We're doing a photo survey/art project about towns with names starting with "Gun".

The hash was in a paddock about eight hundred metres north east of a the Cemetery in Gundaroo. Owen Elliot came within sight of winning the Couch Potato Hash... or would Coffin Potato Hash be a better term? The appropriate terminology was appropriately debated. Psud now reckons it should be Plot Potato Hash.

It was late twilight when we got to the gate to the Gunning Town Common and cemetery - 1100m from the hash. Not being an "Official Vehicle" we had to walk from there. By the time we got to the cemetery Deb was near invisible in her black cloak. She decided that it would be more fun hanging around the graveyard rather than joining us in fence-jumping-geohashing-fun. So she waited there. Dave, Kieran and Psud continued.

Normally fences aren't a problem, you just climb through them - over the mesh or wire, under the barbed wire. We climbed through about 5 fences on our way to the hash (neither Psud nor Kieran have ever met an Aussie farmer who cares about trespass), but unfortunately a fence that had been well made separated us from the paddock the hash was in. Two rows of barbed wire and heavy, taught mesh. We wandered along the well made fence line, found a gate to the nearby state forest, and wandered along that fence line. We had almost circled the hash point by the time we found a wombat scraping into the paddock we wanted to enter. FSM bless Wombats, nothing gets in their way!

Eventually we made it to the hash point, but Psud's super cool camera died on us - it's parting words "Battery Exhausted"! And it was pitch black! So the photos to confirm we made it to the hash point are camera phone shots of a camera phone screen at night. Just believe us, we made the damn hash! Next time we'll bring another GPS with better display. And a spare battery for the camera.

Then back again. Through the wombat trench, through a gate, over five more fences. Deb guided us towards the cemetery with her torch. We made it back to the car and Deb programmed the GPS to take us to the Party. It was well and truly night and Dave, Kieran and Psud were looking shady. Deb had taken inspiration from her visit to the graveyard with her best "Post mortem table" look. We arrived at the birthday/post hash party at about 7:30 to find that AD, Nicola, Matt and Jason had arrived, lit the fire and broken out the beer.

We went to Psud's place, because it was his birthday. And there was a bonfire. And there was drinking. And there was a geohashing cake made by Nicola complete with trees, river, pirate ship, drop bear, sea serpent and a flag emblazoned with today's hash coordinates. This is Psud's last 5 bit birthday. Next year he will need a sixth candle. Cool photos to be posted soon.