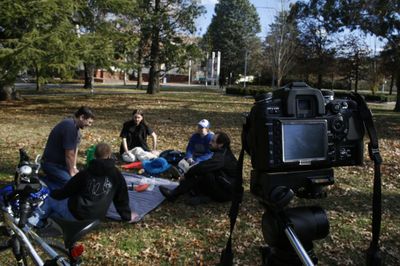 The Canberra graticule lies at -35 degrees latitude, 149 longitude. It encompasses Canberra, Queanbeyan, Bungendore, Braidwood and a number of smaller towns.

Canberra is renowned for being a navigational nightmare due to its high number of roundabouts.

Robyn Archer AO, Director of Canberra 100 (Canberra's centenary, in 2013), told non-Canberrans and particularly the media to "stop bashing 'Canberra'" when they really meant the Federal Government, in a speech at the National Press Club in early April 2012. "Canberra is not the same thing as our federal government," adding that "It effectively abuses 360,000 Australians in a way that would never happen to the citizens of any other Australian town or city. It causes genuine pain and shame, to the extent that many Canberrans themselves have become apologetic for the place they call home." In her opinion, "Any capital, of any country, should somehow symbolise and enshrine all that that country aspires to, its noblest values and its highest ideals. Particular politicians, policies and parties should be judged on how well or how ill they uphold those values enshrined in the national capital - not the other way round."<ref>Media told: stop bashing 'Canberra', Sally Pryor, Canberra Times (newspaper), 5 April 2012</ref>

Note: During summer months, Canberra meetups are at the standard 16:00 (4pm). Expect a return to earlier 14:00 (2pm) hashes in the cooler, darker months of non daylight savings time (a useful graph of daylight hours through the year for Canberra)

1pm is the carpooling-O'clock at the Glowing Cube

Eastern Australia is 14hrs ahead of NYC. So, like all other Australian cities, Canberra's target for the Saturday meet-up will be determined using Friday's (US Time) data - that means that we get Saturday's time on Friday at 23:30.

Where the target lands in the East of the graticule, we may instead invade our neighbour graticule of -35, 148. Similarly (though less likely) is a northern invasion to -34 149.

Both ACT graticules shown in this map

What about inaccessible Saturdays?

In the Canberra graticule it is generally agreed that should the Saturday geohash fall in a remote and inaccessible location, we may instead opt for visiting a geohash location from earlier in the week, ie, a recent retro hash. We feel this is preferable to a voted hashpoint (which, in our humble opinion, rather misses the point of a hash by turning it into a popularity contest). 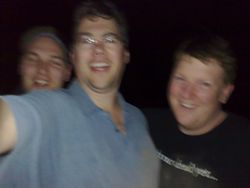 2013 March 12 - Tuesday - Just south of Jerrabombera, a suburb of Queanbeyan near Canberra.

2013 January 6 - Wednesday - In a field beside Majura Road, off the north end of the Canberra Airport runway.

2012 December 29 - Saturday - The side of a small cul-de-sac street in north Kambah, a suburb of Canberra.

2012 November 30 - Friday - At the rear of a community centre building at Hughes, a suburb of Canberra.

2012 November 29 - Thursday - A parking bay on the north-bound laneof Plimsoll Drive in the new suburb of Casey.

2012 October 2 - Tuesday - At the historic Lanyon Homestead, in Canberra.

2012 September 7 - Friday - In a field of an extensive grazing property northeast of Kowen.

2012 September 6 - Thursday - Near the Federal Highway, near Lake George.

2012 August 15 - Wednesday - A paddock immediately east of the Hoskinstown Road, about 4km south of Bungendore.

2012 April 5 - Thursday - Along a fence line south of the Queanbeyan Quarry, off Old Cooma Road.

2009 February 1 - Sunday - Next to Lake George, a scenic view of the OLD and EMPTY lake was found nearby!

2009 January 17 - Saturday - Traditional Canberra surburbia where a group gathered on a lawn, juggled, posed, and then retired to a pub and a cricket ground to discuss cricket.

2008 August 17 - Sunday - A warm and sunny winter's day greeted the geohash crowds who found themselves on a mountain bike trail on Mt Stromlo...

2008 August 05 - Tuesday - With a curious neighbour watching us to make sure we weren't doing anything naughty.

2008 June 17 - Tuesday - Three seperate visits! Two made independently in the early morning. At lunch there was a successful crowd and frisbee in the city.

2008 June 14 - Saturday - we were deliberately 24hours late... i.e., we did Friday's graticule since Saturday's was particularly poor. Nonetheless, we achieved the Largest geohash achievement with 7 attendees to the forest across the border in NSW.

2008 June 01 - Sunday - Graticule invasion of 148! We invented the Geohash Card Game in the pine regrowth past Cotter Dam 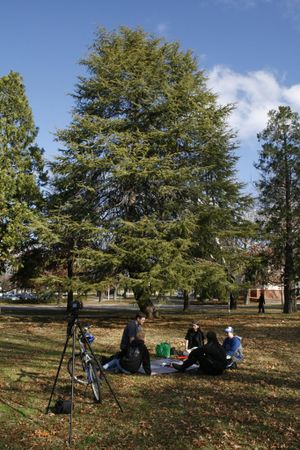 Canberra is rather pleasant at times...

The Canberra Geohashing mailing list is the main tool we use to organise geohash expeditions and carpooling. Even if you're planning on sneaking to a hash point without letting anyone else know, you can watch the mailing list to see when others are planning on being there.

Several Canberrans are regular on the Geohashing IRC channel - especially throughout the Canberra day and evening. Final tuning of carpooling and pickups for geohash visits sometimes occur in this channel as well. Join us and other geohashers from the world for social real-time chat

Kieran also took the liberty of creating a Facebook group, but it's more for propaganda purposes. Invite all your friends geohashing.

Other information to be aware of

These graticules fall under the 30W Time Zone Rule.

Retrieved from "https://geohashing.site/index.php?title=Canberra,_Australia&oldid=4152"
Categories:
This page was last edited on 10 August 2019, at 11:42.
Privacy policy
About Geohashing
Disclaimers