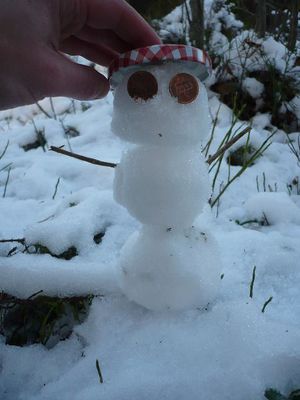 Everything went as planned. It was a hot and stuffy day - somewhere in Madagascar. Fortunately around here, those funny Norwegians have a white powder they call "snø" ("snoy!"). When applied to landscape, it produces a gentle and refreshing chill.

I took the bus from Oslo central bus terminal to Nordliveien (the famous bus stop in zone sø-4), carrying a small canvas bag containing my towel. From there on, I had to rely on my memory of various maps, as I did not bring any. The OpenStreetMap surveying stopped there, as well. It felt like the end of the world. Yet, it was just the beginning of the expedition.

I went on foot, following a road up the hill. And down the hill. And up that other hill. Having passed an innumerable amount of picturesque Norwegian lakes, wooden houses, and even more trees, I reached the lake that would contain the island. The island that would contain my hash. The road ending, I took the direct way across the snowy woods, always in direction of my hash (up and down the hills, and so on).

Several times I assumed to see the island I was looking for. Still, the relentless distance display on my GPS always told me to go further, and most of the presumed islands turned out to be other parts of the shore on the mainland. Eventually, when the distance meter was down to 42, I had the right one. And as the satellite survey correctly had predicted, it was some six meters from shore.

Having heated up from walking the whole time, I figured a refreshing bath would do me some good now. I packed all my stuff and my clothes in a plastic trash bag, and my shoes and the first bag into a second. Thus having protected my gear from humidity, and added the necessary buoyancy, I waded through the waist deep water onto the glorious island.

From there, it was another short hike, and the hash was mine. I took the temperature of the snow at the hash (I brought an infrared thermometer, which does not display ambient, but radiated temperature), took some photos, hid a geocache, and built a snowman. I made up a rather good story about Carribean Pirates being stranded on that Norwegian island, starving to death. You may read it if you seek the geocache some time.

Positively enthused by the experience, and the sheer amount of Achievements I just won, I crossed the lake for a second time, ate some cookies, and strode off full of verve - into the wrong direction. I ended up on some languet next to the road I was looking for, with just a few hundred meters of water between. I turned around with a little less verve, and followed the coastline back, then the road to the bus stop. I was surprised to catch the bus at 4pm - the whole trip had taken me but six hours.