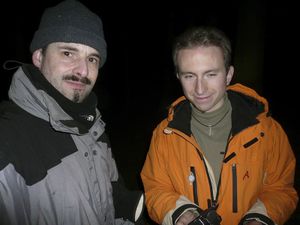 On a wooded hill above Unterlichtenwald, about 15km east of Regensburg.

I left the office at 18:20, already long after sunset, to cycle about 14km to Unterlichtenwald where Tomcat and I had agreed to meet; he would only have to make a small detour on his way home to get there in his car. It had been a clear, sunny winter day with wind from the east, so it was already freezing cold to begin with. But I was well prepared and had brought warm skiing pants and the zip-on hood for my skiing jacket. I really enjoy riding through the night with the right clothing, a bright headlight and good music, especially when there are long straight segments without intersections and no other traffic.

At 19:15, I arrived in the small hamlet in the valley below the hashpoint, very warm and comfortable despite about -5°C air temperature. I cycled down the small access road we had agreed to meet on, up to a sign that said something about private property. While turning around to go back to the main road, a beam of light from the edge of the forest flashed at me, so I looked at the sign again, found that it was just a disclaimer, and continued past, to find Tomcat at his parked car.

We took off into the forest, and immediately found out that the path we had intended to take was in reality a rather steep creek valley. After a few meters, I had to park my bike there and we continued on foot, repeatedly jumping over the icy, half-frozen stream because the other side seemed more traversable. I found several places where there were very peculiar ice pillars of about 10cm height below the layer of frozen leaves, which would crumble when stepped on. I have no idea how these pillars (with air between them!) form under the leaves. Apart from this, the frozen ground was rather easy to walk on, and after going up a steep slope, we found a real path again, which lead us closer to the hash until we abandoned it for the last 60m. For a while we moved back and forth between some trees during the usual argument between our GPSes, until we declared a certain piece of moss to be the exact location.

For the next half hour or so, we took various pictures of us and the area, experimented with sweeping our bike headlights across the trees during a long exposure and tried to capture the starry sky. I discovered once again just how dark the countryside really is at night. With a manual preset to ISO100 and 16 seconds at F2.8, i can take very good pictures of the night view over Regensburg from nearby hills, but in the countryside, pictures taken with the same settings turn out almost completely black. Even the brighter stars, which are easily visible in photos I took in town, are hard to make out on these images.

Anyway, we measured -5.6°C at the hash (with the thermometer's sensor on the ground), and to avoid getting cold we got going again. For the way back, we managed to use only "real" tracks even though most of them were overgrown and hard to identify as such. I got my bike back from a few meters up the creek, and we ate some leftover christmas sweets at the car. I got out my thermometer again and it went down to -9.1°C near the ground there, probably because this was the north face of the hill that hadn't received any direct sunlight that day. So, just barely not enough to break the record for the coldest geohash. But it should be the coldest one visited by bicycle so far ;-)

By then it was well past 22:00, so Tomcat went home in his car, and I started my way back as well, contemplating that anyone else probably would've insisted to pack me (and possibly my bike) into their car and drive me home. Which is why I love doing such expeditions with people who know me well enough to accept that I indeed enjoy cycling even if it's dark and cold and late :)

Coming home at 23:50 (and in need of a shower as well as a very late dinner), another peculiarity made me smile: There's probably only one IRC channel in the world where you can complain about the stupid forest not being cold enough at -9°C and everyone understands and agrees without raising an eyebrow.