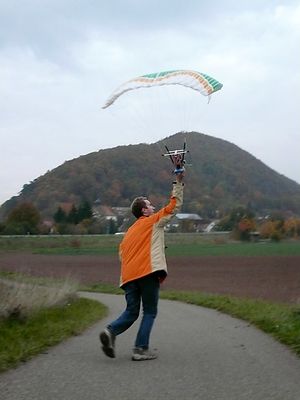 I work as a database programmer and multi-purpose geek in the "IT-Speicher" in Regensburg, Germany, and toy around with infrared thermography, unconventional r/c aircraft, aerial photography, and some other odd digital photography techniques in my free time.

I do have a website but for the moment it is horribly outdated.

I was a very active Openstreetmap mapper (back in 2007, when Regensburg almost completely missing on their map) and I've been a moderately, but constantly active Geocacher since 2006; these combine well with Geohashing expeditions.

I visited a lot of hashpoints in 2009, which was an amazing year - to a great extent thanks to geohashing expeditions and the people that accompanied me there. Since then my enthusiasm has faded a bit, so my weekend plans are no longer ruled by the DJIA, but I'm still looking for ones that would make for good day trips, and trying to at least pay a short visit to those hashpoints that are "too close not to go", which for me means that they're reachable from Regensburg by bicycle, including the corners of the neighbor graticules:

I have also been seen in other graticules across central Europe a few times, due to vacations and dedicated geohashing trips.

I can be found idling around in #geohashing most of the time, and I've built a program to generate Maps and Statistics about graticules and expeditions on the wiki.

... and 99 other expeditions before that!

I'm particularly looking for opportunities for these in the future:

Retrieved from "https://geohashing.site/index.php?title=User:Dawidi&oldid=61675"
Categories:
This page was last edited on 27 December 2013, at 22:09.
Privacy policy
About Geohashing
Disclaimers