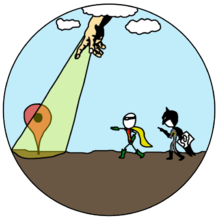 To claim this achievement, you have to visit a hashpoint that is located on sacred ground. This could be at a church, or a temple, or a graveyard, or places of worship such as wayside crosses and shrines. Ancient native burial grounds also count. It is important that the coordinates have been officially consecrated - that is, by a priest of the according religion. For the purpose of the achievement, "holy ground" is considered to extend to the limits of the property used by the house of worship, but not to other church-owned properties such as a school or hospital. For religions that do not specifically consecrate places of worship, or which consider all their ancestral lands to be sacred ground, geohashers are expected to use their discretion and good sense, such as they are.

The intention of these requirements is that the geohash brings you to a pre-existing special religious place. If you just bring a cross and say your prayers at the hashpoint or bless it with stolen holy water, it doesn't count. This is not a game of D&D. If you are a priest and call upon your god to bless the hashpoint, it does count, but you are greedy and therefore might be committing a sin.

The following users have won the Holy Hash award:

Retrieved from "https://geohashing.site/index.php?title=Holy_hash_achievement&oldid=776355"
Category:
This page was last edited on 16 March 2021, at 03:19.
Privacy policy
About Geohashing
Disclaimers