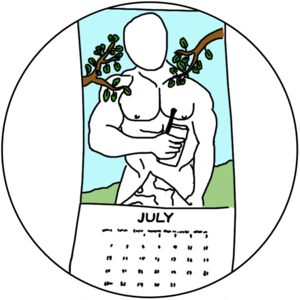 Well, it's coming up to Christmas, and I know that I myself am particularly bad at buying gifts. Talking to a certain female geohasher who wishes to remain nameless, I was pointed in the direction of the Men Of Cricket calendar. Why she thought I'd be interested, I'm not sure.

I couldn't help noticing that some of these gentlemen appear to have put considerable effort into looking the part, and I can't help thinking that if they spent as long in the nets as they did brushing their hair they might have a much better chance at actually winning some cricket sometime. They also seem to have taken great pains to be placed in a variety of scenic locations, none of which (I assume, though I have no citation) were very close to a cricket field at all. In fact, this calendar has nothing to do with cricket, it is about getting nice young ladies like *cough* Joannac *cough* to spend their money.

Geohashing, on the other hand, in a sport in which people regularly visit scenic and interesting places, occasionally wear very little clothing, and is generally done by a bunch of interesting and realistically muscled members of the human race, who generally aren't too bad to look at.

And thus: “Men of Geohashing” was born. On a particular nameless person's insistence it should be specifically "men", but I personally will accept any other willing submissions for personal perusal, if not for final publication. We will be coming up with a name based on the submissions and the gender of the submitees, I think.

So, throughout the next month leading up to Christmas, I am looking for approximately 12 (those cricketers have 13, but they're not real good at maths) good quality tasteful photos of real geohashers at or near real geohashes for the production of a calendar. I doubt the international geohashing community quite measures up to the Australian cricket team physically, and I hope we can approach this project with tongues firmly in cheek, but I'd like to see what we can come up with in time for Christmas, the traditional time for the giving of bad gifts.

A certain someone has suggested that the calendar be constructed entirely of geoflashing pics. While I myself am moderately comfortable with the idea (though I feel sorry for those sheep) I see no need to limit the project to this, rather to let the ample amounts of geohashing creativity run wild, and see where it leads us.

So, I'm looking for submissions, either from hashes already complete, or of photos taken specifically for the purpose. Those who submit an entry for the calendar will be eligible for the “Calendar Girl” achievement, which will have better art when somebody clever contributes some. The final calendar will be available to all.

As of 2009-07-26 entries have been made for 13 months. The layout is completed and available for comments. Scribus page layouts are available on request.

Now wouldn't it be nice to have a real paper, ring-bound, professional copy of your calendar? If sufficient people are interested, and if we can agree on a common version (2009/2010 or 2010 only, Smarch or not, any other edits), printing would start at about 4 Euros each when ordering 50 copies. We can certainly organize an efficient distribution chain (i.e. sending a big bunch to Vancouver/Seattle) to keep costs low. -- relet 12:15, 16 August 2009 (UTC)

We've only got 11 calendar pages so far, so either someone else should submit a photo or we should make up something else. I am prepared to trawl through all the userpages to compile enough photos for a collage of "CheesyGrins" if required. (although some help would be nice). Any other ideas? -- UnwiseOwl 08:49, 27 May 2009 (UTC)

What about our cover girl? Will the cover girl just be the same as one of the months, or will the calendar not have a cover? --aperfectring 11:54, 27 May 2009 (UTC)
I'd like to participate. I already posted my geoflashing picture, but maybe something more calendar-like would be better. That picture is funny but not "sexy" enough. Of course, I would post a larger one. --Pierre 12:49, 7 July 2009 (GMT+1)

This is joannac's suggested format for the calendar. If you have ideas, post them here.

What size/resolution should the final image be? And where should we put our witty quotes? user:thepiguy

Retrieved from "https://geohashing.site/index.php?title=Calendar_girl_achievement&oldid=120433"
Category:
This page was last edited on 2 January 2012, at 21:38.
Privacy policy
About Geohashing
Disclaimers