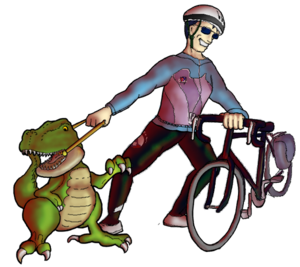 I'm Robyn. I hash on foot, by bicycle and by transit, usually bringing my Hashscot T-Rex with me. I try to avoid going by car, because burning fuel for pointless expeditions is dumb, but exercising for pointless expeditions is the win. I am deeply addicted to geohashing, however, so what began as sometimes stopping off at a geohash in a car while on my way elsewhere, has escalated to sometimes answering the call of distant geohashes too juicy for me to resist, but too far for me to bike before midnight.

When I'm at home in Vancouver, I'll usually try for the nearest hash in Vancouver, in Surrey or across the border to Bellingham. I get over to Victoria from time to time, too. I have good maps locally. I also travel all over North America for work, so you'll see me at strange graticules elsewhere. I might just surprise you some day.

I am also known on the internets as Qov. I'm recognizable as another Internet personality as well, but I can trust you not to blab, right?

Now and Near Future

I'm not very good at keeping this up to date anymore.

Things that have thwarted me

Never turn down a chance to geohash.

Most recent are listed first. Single horizontal lines every ten missions, and double lines every fifty, to facilitate counting. Bold numbers are the success count and bold words indicate an award or consolation prize taken for that attempt. Older geohash expeditions are summarized and linked on their own page.

I've decided to count a geohash "successful" if I:

(a) get to within the accuracy figure of the coordinates as shown by my GPS,
(b) have the GPS show a distance remaining of zero, or
(c) for airhashes, take a readable photo within 10 seconds of each latitude and longitude.

See Robyn/All_Geohashes for links to my previous one hundred geohashing expeditions.

Alphabetical by username. Date is first meeting at a geohash.

These are the ten or so ribbons I have earned or updated recently. I have moved all the older ribbons to their own page.

Robyn earned the Tale of Two Hashes achievement
by meeting the challenge by APR, Jim, and Rhonda to geohash in Vancouver going to the (49, -123) geohash on 2011-04-12.

Things you can blame me for on the wiki.