On the side of Highway 99 just before it meets up with King George.

Ironically enough, the main problem with the geohash being on the highway is accessibility! As thepiguy learned on his way to this hash this section of the highway is off-limits to cyclist, there may also be restrictions about stopping on the shoulder since it's such a major road. It's too accessible!

That being said, thepiguy doesn't care. He's going to take the geohashingmobile in the morning and visit the hash. If need be he'll pretend he's having car troubles, or that a hub cap flew off.

Wait! I've got it! I'll pretend that I stopped to try and figure out my GPS and that I think it made me take a wrong turn! People are always getting confused by technology!

All I have to do is drive down the highway and stop at the right spot. There's a small bridge right before the hash, so assuming I'm traveling the speed limit (or something close) the hash should be 10 seconds after the bridge.

Xore is thinking of taking the 321 bus to the south surrey park and ride, then walking ~1km to the geohash point. Since he doesn't have a GPS device, he's going to try to triangulate position based on trees from google maps aerial, dashed lines on the highway, etc, going for batteryless geohash

It was decided at the last moment that this should be a Formal Attire Geohash, so naturally we had to make it into a wine and cheese party by the side of the highway.

Thepiguy had spent a few minutes in the morning figuring out what he thought was a decent plan to get to the hash point. When he returned to the internets later that evening he found that his plan had not only been found, but discarded, rewritten and modified by other Vancouverite geohashers. Somewhat shell-shocked, he shrugged his shoulders, reserved the geohashingmobile for Saturday and left home early that morning to go pick up...

Elbie's day began early, in an evening gown that thepiguy was unable to lace properly when he picked her up around 7:30. The two of them then drove towards a gas station further in town so that they could get...

Robyn was waiting at the predesignated gas station, and all three were soon busy getting her bike in the van, and preparing formal attire. Thepiguy said, "I've never been so excited about dressing up!" Once everyone was loaded they headed off too... 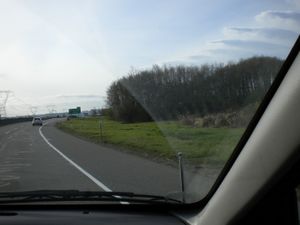 Thepiguy had previously used some simple very complex physics to calculate that they would reach the point approximately exactly 10 seconds after they reached a small bridge on the highway. 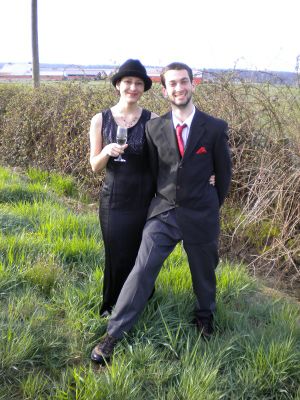 Elbie and thepiguy in formal attire. On the side of the highway. Getting stared at.

As they got to the bridge, thepiguy handed his watch and GPS over to Elbie, who counted off the seconds. The hazard lights were engaged and the van was pulled over appropriately, into the formidable shoulder, only an arcsecond away from the point. The three adventurers jumped out of the vehicle, and excitedly pranced over to the point that thepiguy's GPS advised as the spot.

They celebrated with photo ops, gewürztraminer (for Elbie), grape juice (for thepiguy and Robyn), cheese & crackers, and nibs, served on fancy cocktail toothpicks. Drivers passing by gave them some truly bewildered looks. The three waited for Xore, playing charades (since it was the only game that seemed appropriate to play in formal attire), picking up trash, and making a little "xkcd" sign out of toothpicks. After a half hour of waiting in the cold they decided that Xore probably wasn't going to make it and that they should continue on with their other plans for the day.

They piled into the van and set off down the highway only to see a certain geohasher walking down the side of the road...

Xore changed plans and ended up taking the 351 bus to the south surrey park & ride. This turned into a debacle as he arrived at burrard station just as it was pulling out. Half an hour later, he was on his way! Since the bus route took him right past the geohash point, he saw the Formalwear geohashers, and snapped off a poor quality photo as the bus whipped past. However, after hiking back along the highway for 15 minutes, all that was left was a lonely looking tire rut and a gaggle of footprints in the grass off the shoulder. Foiled!

Wait, what was this? Not 15 seconds later, Xore looks up to see that they're back! The group had seen him walking along the highway and doubled back for group photos and good times! A great first attempt & success at geohashing for Xore.

After a rapid succession of frantic highway exits, u-turns, and general confusion (during which they ended up on at least 3 different major highways) they eventually made it back to the hash point and quickly pulled over to greet Xore. 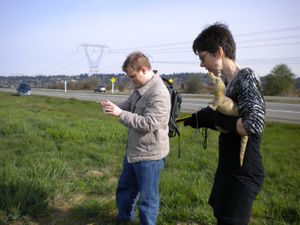 After some introductions and photos, Xore started back down the highway, and Elbie, thepiguy and Robyn climbed once again back into the van.

As thepiguy attempted to pull back onto the highway, it was soon evident that the right front wheel was stuck in a giant tire shaped mud crater. Elbie and Robyn made an effort to push the van out, to no success while thepiguy's reckless flooring of the engine careful attempts to free the vehicle only dug it in deeper. Trying to figure out how to proceed, the three were pleasantly surprised when another van pulled over, with two heroes ready to help them. 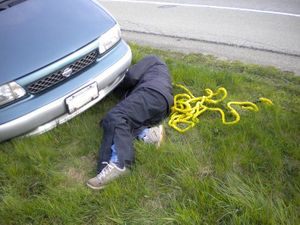 Getting the tow rope ready

It is not known why these kind strangers had a tow rope in their trunk, or why they took pity on the three remaining geohashers, but they were certainly grateful for it. At the first opportunity, there was a quick huddle of, "Oh dear, what's our story? We can't tell them what we're really doing, what if they change their mind and think we deserved this!" it was agreed upon that they were on their way to an art reception in Nanaimo, and had pulled over to look at a map. It did not seem like the time to be explaining geohashing.

Our heroes promptly, and successfully, towed the van out of the shoulder, and after many words of appreciation, the adventurers were soon back on the highway. Passing by Xore once more as they exited the highway to turn around, the van was soon heading north. Robyn was dropped off at Ladner, and then thepiguy and Elbie were off to UBC. Along the way, Elbie turned on the radio, and wound up on a station in a language neither of them knew. "Sounds like Farsi," she commented. A few songs later, she was confused -- an advertisement came on in what she thought sounded like Polish, as did the station's hosts. Later, the songs sounded to Elbie like they were in Turkish. Boy, she was confused.

After thepiguy dropped her off at her apartment with her stuff, Elbie rushed off to her laptop, to look up the confusing radio station. Her confusion was relieved when she discovered it was CKYE, which "broadcasts ethnic music and talk radio, the majority of which is heard in Hindi and Punjabi. Topics range from world news and social issues to popular culture. Includes some English, Serbian, Hungarian and Polish programming." [1]