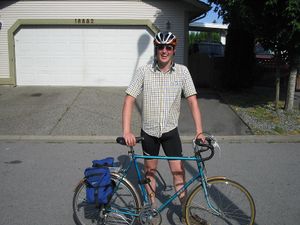 I occasionally geohash as an excuse to cycle. Currently residing in Hyde Park, Chicago, IL.

While not quite addicted to geohashing, geohashing is an extension of a game I've like to play since age 1, namely picking a point on a map and figuring out how to get there. Now, I actually go.

The Margin of Error requirement for claiming a successful geohash relies on a margin calculated from a GPS device. I generally use pilotage on Google Earth images to find the point. Google does not publish the uncertainty of it's images and map placements, so I use a 20m error to define success.[1] Many cities now also provide GIS information, so if a survey marker can be found, I can increase my accuracy many times over. Unfortunately, this also results in more unsuccessful hashes. Due to the precision of geohash points, I do not strive to reach accuracies of less than 1 meter.

In the Chicago area, I have not yet found a database of survey monuments. When I moved, the previous owner left behind a Garmin GPS 12 which I now use to mark the hash points.

2009-06-12_49_-122 Travelled from home ~ 4km by bicycle. Hash point on fenced private property. Arrived 3pm, read newspaper within 100m of hashpoint on small piece of lawn, approached as close as possible to the point at 4pm. Left 'Lisp'[2] xkcd comic printout at local postoffice box in front of the property. Leisurely return home via new subdivisions.

2009-06-16_49_-122 Trip across the river to Abbotsford. Traveled to the hash point directly by bicycle. Passed by the point, located on a residential porch, then explored Mill Lake park. Stopped for strawberries on the return. A hi-rail driver who I had crossed in front of earlier today stopped by as I was eating, but didn't recognize me.

Retrieved from "https://geohashing.site/index.php?title=User:Fbfree&oldid=210950"
Categories:
This page was last edited on 5 July 2016, at 14:27.
Privacy policy
About Geohashing
Disclaimers