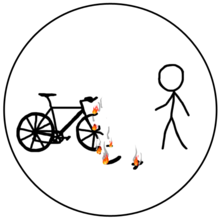 You fail to reach the meet because your car broke down, you missed your bus, your train was late, your plane was hijacked, your horse went lame, or other transportation failure occurred.

In cases where the mode of transport is human-powered and it is a human who becomes sick, injured, or catatonic, claim the Trail of Blood consolation prize instead.

Retrieved from "https://geohashing.site/index.php?title=Train_wreck_consolation_prize&oldid=92324"
Category:
This page was last edited on 22 July 2015, at 13:03.
Privacy policy
About Geohashing
Disclaimers