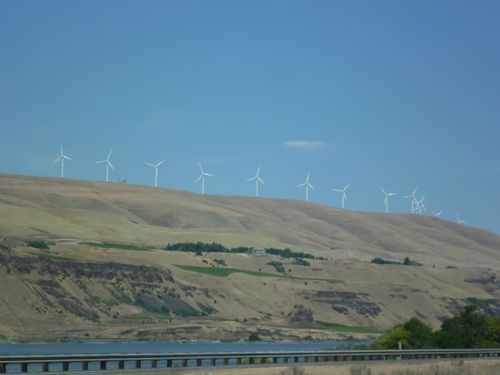 Huge windmills rise from the rim of the Columbia Gorge.

The Goldendale graticule is dominated by the wheatlands of North Central Oregon and South Central Washington. It is divided, like the two states, by the dramatic Columbia River Gorge, through which Interstate 84, Washington State Highway 14, and two major railroads lines all run. Large farms intercut by deep, rugged canyons make accessible hashpoints few and far between.

Michael5000 and Mrs.5000 reach another hashpoint by the waste facility.

Michael5000 returns to stop by a driveway west of Condon, Oregon.

Michael5000 finally succeeds, eight years later. This is the first successful expedition to the Oregon side in this graticule.

Michael5000 and Mrs.5000 fail to reach the hashpoint due to barbed-wire fencing and a highly exposed position.

Thomcat hikes up into the hills to conquer this virgin graticule, and on the Washington side of the river to boot!

Wade and Robyn get close, but not quite close enough, to a hashpoint in an agricultural field in the first recorded attempt at this graticule.

Retrieved from "https://geohashing.site/index.php?title=Goldendale,_Washington&oldid=858955"
Categories:
This page was last edited on 8 January 2023, at 00:42.
Privacy policy
About Geohashing
Disclaimers