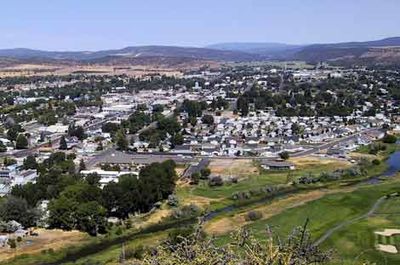 Rugged terrain cut by steep canyons makes much of this graticule hard to reach. The Ochoco Mountains are the main geographical feature, and nearly a third of the area falls inside the Ochoco National Rorest. Prineville, to the west, is by far the largest town, although the little seat of Wheeler County, Fossil, lies on the northern edge. The even smaller village of Mitchell is on U.S. Highway 26, which runs east to west across the graticule's middle.

Michael5000 and Mrs.5000 climb a little hill, eleven years after their previous joint adventure in this graticule. Success.

Michael5000 trusts his memory, which is stupid as his age. Thwarted.

Frogman and Higgs went for a brief walk in the Ochoco foothills. Success.

Michael5000 has strange encounters in the Ochoco National Forest. Success.

Retrieved from "https://geohashing.site/index.php?title=Prineville,_Oregon&oldid=842754"
Categories:
This page was last edited on 10 July 2022, at 18:40.
Privacy policy
About Geohashing
Disclaimers