The central area of The Dalles graticule is taken up by Oregon's Hood River Valley, a lightly settled agricultural and orchard district. Its main town, Hood River, is set in the narrow Columbia River Gorge, as are White Salmon, Washington and The Dalles, Oregon, the other two larger towns in the area.

Although the Gorge is a transportation corridor and US highways 26 and 95 both cut through the graticule, much of the area is difficult to find access to. Hashpoints seem to often be on the other side of the creek, river, or cliff from the geohasher. Mountains of the Cascade range, including towering Mt. Hood, dominate the western half of the graticule, with the eastern edge starting into the dry canyon-cut wheatlands of North Central Oregon and Eastern Washington.

There appear to have been 7 expeditions to the graticule in 2012.

There appear to have been 3 additional expeditions to the graticule in late 2011. 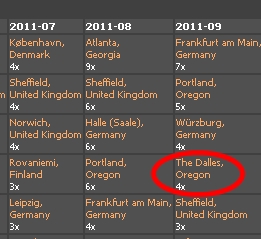 On September 24, 2011, The Dalles graticule was tied for third for most expeditions in the month.
Retrieved from "https://geohashing.site/index.php?title=The_Dalles,_Oregon&oldid=858957"
Categories:
This page was last edited on 8 January 2023, at 00:42.
Privacy policy
About Geohashing
Disclaimers