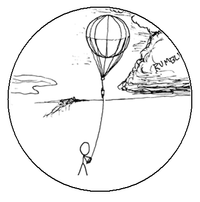 The language of this achievement is intentionally vague, in order to include the greatest possible variety of devices. Obviously, a GPS-enabled paraplane such as dawidi's is acceptable, but we did not wish to exclude non-electronic devices such as kites, non-airborne vehicles, or organic carriers such as dogs. Having another person carry a GPS to the hashpoint does not qualify for this achievement (see Puppet Master Geohash).

To prove their eligibility for this achievement, the Geohasher should submit at least the following (or equivalent):

It is NOT recommended that Geohashers attempt to claim this achievement in an area qualifying for the No Trespassing Geohash.

The following Geohashers have supplied proof and have won this award:

Retrieved from "https://geohashing.site/index.php?title=Geohash_by_proxy_achievement&oldid=778287"
Category:
This page was last edited on 7 April 2021, at 14:10.
Privacy policy
About Geohashing
Disclaimers