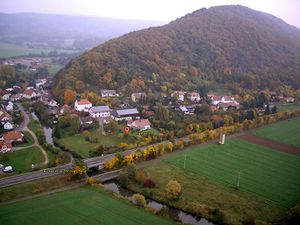 In Sulzbach an der Donau, a village 10km east of Regensburg. The exact spot was under an apple tree in a meadow that appears to be private property but is accessible from the cycleway without any fences or signs. The Walhalla temple, a kind of German "hall of fame" from the 1840s, is just on the next hill and partially visible from the hash.

The evening before, looking at the satellite image of the hash coordinates, I assumed that this would be private property and unreachable because of the high-traffic road between the hash and the cycleway. But I saw acceptably large meadows and fields to the south, between the cycleway and the river, that could allow me to fly my DIY electric R/C paraplane from there and, maybe, flying the GPS over the hash would count as reaching the coordinates as well. Strong winds had been rare over the last few days, and if the stubborn fog happened to lift a bit, I'd even have the chance to take a some nice aerial photos. The biggest obstacle (as always) would be getting up soon enough - to cycle there, fly, and cycle to the office and arrive at an acceptable time.

I overslept just one hour (much less than on an average weekday), got up at 6:00 and (thanks to my long-winded breakfast habits) hit the road at 8:45. It was foggy again, but not very windy, and an hour later I arrived in Sulzbach an der Donau to check out the spot. Aha, there's a low bridge over the creek, and one can cross the road by walking along the side of the creek. Oh, no fence, so physically I should be able to get to the exact coordinates. But what if there's a yard dog somewhere between the houses across the meadow? (One doesn't really have to fear getting shot by land owners in Germany, but in rural areas, overzealous dogs will chase you.)

I didn't want to take that risk (at least not alone), and I hadn't carried all the R/C flight equipment with me for nothing. So I parked the bike and deployed my paraplane.

The sun was just experimenting with a few holes in the clouds, so I did a photo flight first, shooting one round of pictures from over the hash and then some more from other perspectives. Normally I would always land the aircraft right at the launch site, but today I this was not possible. To launch into the easterly wind, I had to use the space between the road and some overhead lines, but for landing, I had to walk to the other side of the overhead lines and have it come in between these lines and the riverside trees (seen in the images). This worked out quite well though.

For the second flight, I removed the camera from the passenger seat and strapped in my trusty Garmin Vista. This GPS has a barometric altimeter to complement the GPS altitude readout and, unlike units without that extra sensor, records quite good 3D track logs. With AAA cells instead of the expected AAs, it weighs less than 140g, compared to the camera's 150g that the plane is used to. With the track recording interval set to 1 second, ParaDIY was launched again and carried the GPS over the hash point, flying a few circles to ensure hitting the spot at least once, then headed over to the landing site. Although I usually try to catch the gondola to minimize damage and shock, this time it came in a little short, but with a little headwind literally just touched down on the edge of the field, even without tipping over. Very nice.

It turned out the GPS missed the hash by just maybe 8-7 meters at one point during the flight. Given that I never practised that kind of thing, quite a remarkable result :)

With these good flights on the safe side of the timeline, I stowed everything and rode back to Regensburg, arriving at the office a little sweaty and just in time for lunch.

The GPX tracklog is available in this ZIP file. If you open this in Google Earth, open the properties of the "Tracks" subnode, and on the "Altitude" tab, select "Absolute". Also, make sure the "Terrain" layer is active.

Tomcat didn't want to miss the hash either, and emailed me, so we agreed to go there again in the evening after work. (Yes, this was one of my shorter work days ^_^)

We hurried but got there only at 18:00, not long before sunset. Although it was getting dusky already, I got out the last of my 3 flight battery packs and did another photo flight.

After that, we visited the hash meadow again and, with our combined bravery, snuck to the exact coordinates, finding them under an apple tree, took the usual pictures of us and our GPSes, and headed back off without being noticed.

On the way back to Regensburg, we also found and logged a little traditional geocache at the foot of the Walhalla, and ended this eventful and exhausting day in a delicious way at a small but very good pizzeria in Prüfening.