In the Danube river, about 30m downstream from a pedestrian bridge in Bad Abbach, 10km south of Regensburg.

... cycled there in the evening. They knew the location well, having crossed the bridge in question many times on bike trips, and once or twice in their inflatable kayaks. The river is split into two arms here, the western arm (with a lock) being used by freighters and motorboats, and the eastern one (where the hash was in) reserved to kayaks and the like. The current is rather strong right under the bridge, so dawidi was not keen on attempting to swim there, and it was too late in the day (and still too hot) to bother bringing the kayak... but he had a different plan.

Earlier in the afternoon, dawidi had made a visit to the hardware store to buy three 20-meter spools of plastic rope; and also had cut open a plastic 1.5-liter bottle (of store-brand Ginger Ale) and cable-tied a keyring to the bottleneck. After arriving at the bridge, Tomcat unpacked the ropes and tied them together, forming a colorful 60-meter rope, while dawidi inserted his older GPS (an eTrex Vista; the newer HCx wouldn't fit) into the head of the bottle and taped a GoPro fisheye "action" camera into the bottom. After attaching the rope to the keyring, they started the camera and taped the two pieces of the bottle back together.

A short test at the riverbank confirmed that the bottle would float right side up, so they walked to the center of the bridge and dawidi "launched" the bottle on its mission, lowering it over the railing into the water. While giving more and more rope, they moved up and down the bridge watching the other GPS, until they were reasonably sure the bottle had crossed the hashpoint at least once.

While they were doing this, a cyclist stopped and asked, in a rather serious voice, what they were doing. As one of dawidi's coworkers had warned him, the atmosphere among the people in Bad Abbach is rather tense at the moment: after a series of arson incidents (four on the previous weekend alone), and no clues about the criminal yet, you only have to do something slightly unexpected to become a suspect. They somehow managed to get it across to the cyclist that they were harmless weirdos, and continued navigating the bottle around the river.

Taking turns, they pulled the rope back in - after leaving the water, the bottle spun rapidly for a while because the rope was still a bit twisted, having just been unpacked. A first glance at the GPS inside the bottle revealed that indeed, they had hit the correct spot, and also the bottle had remained completely dry on the inside.

On they way back to Regensburg, they stopped to take some long-exposure photos - and were again questioned by a concerned motorist who didn't really understand why someone would be in a field at night to take pictures.

The video taken by the "geohasher in a bottle" is quite hilarious: 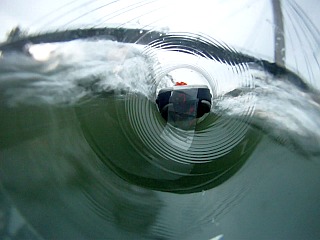