So we had a shot at the Golf Geohash? The hashpoint was situated in some woods by the parking lot for the clubhouse. But the clubhouse was in the middle of the course. Maybe next time we'll do a calculation to find the center of mass of the entire course and see where that is relative to the hashpoint. Or maybe not. 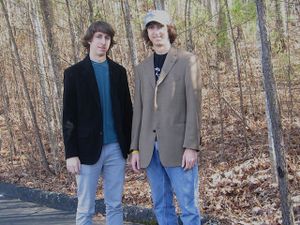 We went for this one because it was reachable and it was Sunday. This was the first hash we'd done that was south of 285. It was a nice day and a nice drive down to the Planterra Ridge Golf Course. Google maps said showed the hash about 20 feet from the parking lot, and Google maps was right. But we figured there was maybe, I don't know, grass next to the parking lot. Nope. A full three inches past the end of our parking space and we were in some thick woods. But it was only 20 feet, so no biggie. We declared a tree to be the hashpoint, and were treated to the rare '"zero'd" gps. And we got a picture of it! Chris picked up some geotrash and chalked an arrow into the nearest parking space while Nick wrote the xkcd info. It was beautiful! Then we put on jackets and explored the area, walked down to the clubhouse, driving range and a putting green. Then we returned to the car and departed. On the way back we did some reconnaissance on the next day's hash, which we would attempt at sunrise.