The day's coordinates fell on the edge of a grassy field alongside a brook/ditch. This was the first stop of the day for Nathan and Jianfeng, who were attempting to earn the Time-Traveller Geohash Achievement. This location was about halfway between Montezuma, IN and Dana, IN, right off U.S. Highway 36. 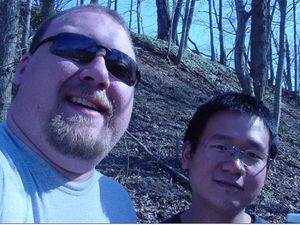 Nathan and Jianfeng left from the University of Illinois campus around 2:00 that afternoon in the hopes of earning a Time-Traveller Geohash Achievement that day. Their first stop of the day took them across the state line into Indiana along I-74, then south along Indiana State Highway 63.

When the GPS told them to get off the road, they found a small paved road off to the side at the location. They were only able to follow it for a hundred feet or so before a metal barrier prevented further access by car. So, Nathan and Jianfeng took their supplies with them and headed out the rest of the way on foot. They noticed that behind the metal barrier, the old road continued on. It was obviously abandoned and littered with debris, but it was paved with asphalt, so that was quite surprising.

After following the abandoned road to the top of a hill, they discovered a grassy field with an old, rusted weathervane standing alone. Following the GPS signal, they trudged along a little while longer and found that the hash point was only a couple hundred feet due west of the weathervane. The location was also near the edge of a dropoff leading to a brook below. An old iron fence was attached to some of the trees just south of the point, giving the boys a little safety from falling into the brook.

The boys reached the point shortly after 4:00 local time (though Nathan forgot to take a picture of his watch to verify this statement--though, as you'll soon discover, it did not matter). It did not appear that anyone had arrived there yet that day--at the very least, there was no marker of any kind at the location indicating prior arrivals.

Nathan and Jianfeng, believing they were the first (and only) geohashers to arrive at this location today, took a few pictures and planted a marker flag and then headed back to the car. By doing so, Nathan had now reached hash points on consecutive days (see here) which earned him the Consecutive Geohash Achievement.

After arriving back at the car, they booked it west down U.S. Highway 36 toward Garrett, IL where another hash point was located. Remember, they were trying to earn the Time-Traveller Geohash Achievement, so time was of the essence. Did they make it? You can continue reading about Nathan and Jianfeng's journey that day here.