Today's hashpoint is located on the edge of a Rhine Branch near Rußheim, a part of the municipality of Dettenheim. Dettenheim used to be a small village very close to the Rhine. Due to fear of floodings, many people moved to the new village of Karlsdorf nearby. Today, only a few houses in Dettenheim are left. In 1975, the two former municipalities Liedolsheim and Rußheim were merged into the new Liedolsheim-Rußheim municipality, a very long name, which was changed into Dettenheim in 1978. 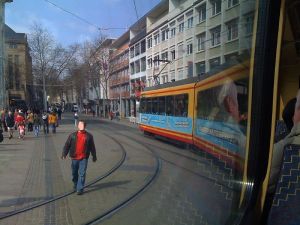 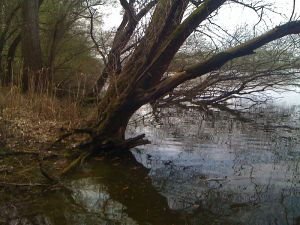 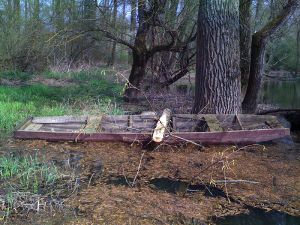 a boat in one of the Rhine branches

I had planned to go to Heidelberg on this day. Instead of taking, as ususal, the S-Bahn from Karlsruhe to Heidelberg, I decided to take a larger detour via Rußheim. Here's my planned schedule:
11:49, S1 from Karlsruhe Marktplatz, arriving in Hochstetten Grenzstraße at 12:28, then take Bus 192, departing 12:33, arriving at Rußheim at 12:45.
Then, I planned in two hours to walk the 2 kilometers to the Hash, explore the nearby area and walk back.
and then take the 14:45 Bus 192 to Huttenheim, then take the 15:04 Regionalbahn to Bruchsal and from there a Regionalexpress to Heidelberg, arriving at 15:48,

I started in Karlsruhe as planned. Since the S1 was a bit delayed in Hochstetten, I had to hurry to catch my bus to Rußheim. However, since there were no announcements of the next stop on the bus, I had to guess my stop and, of course, I picked the wrong one. Aside from the fact, that I then chose the wrong path, which resulted in a little detour, I managed to find the Hashpoint right at the edge of a larger Rhine branch. I would have stayed longer, however, since I'm allergic to tree-pollen, I chose to leave, as soon as possible, after leaving a marker and taking a few photos. Back in the village of Rußheim, I continued my journey as planned. Overall, not a very spectacular report, however I like some of the pictures I took near these swamp-like Rhine branches, especially the boat, as seen to your right. More pictures in the gallery.

Here's the GPS-Track (.gpx, .kmz, in Google Maps) of my walk from the stop Liedolsheimer Straße to the Hashpoint.