Today's Hashpoint is located in a field just outside of Ittersbach, a village of 3.074 south of Karlsruhe. It is the terminus of a side-branch of the Albtalbahn.

This Hashpoint is just too close not to try. Since I was busy during the day, I decided to do a late-night expedition. It won't count as a Midnight Geohash though, since for that I'd have had gone this morning. On 21:30, I'm going to take the S11 from Karlsruhe Marktplatz, arriving at Ittersbach Bahnhof at 22:16. If I miss this train, I might also take the next one, one hour later. Trains back to Karlsruhe leave Ittersbach at 23:24 or 0:40. 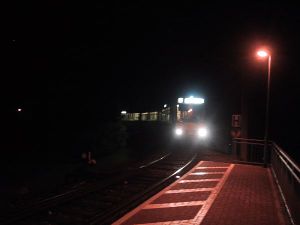 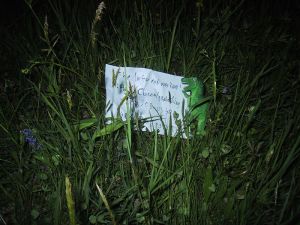 A warning/disclaimer regarding the photos: They were taken with my pre-historic camera, built in 2000, which was designed to be extremely simple to use, howver it doesn't let you use anything but an automatic mode, which makes it impossible, to take decent pictures at night. It's the only camera I have, except for my phone's camera, which is even worse. Which is why most pictures are either dark, blurry or taken with flash on shorter distances.

At 21:30, I left Karlsruhe Marktplatz, using the S11 to Ittersbach, where I arrived at 22:18. On the train ride, a few raindrops started to fall, I was already afraid of another Drowned Rat Geohash, but luckily, aside from a little light rain every few minutes, it was fine. So I stumbled into the dark (I forgot to charge my flashlight, so the only light source I had was my phone's screen, which doesn't really help). The hashpoint was reached after a short walk (tracklog see below), it was in the middle of a grass field, with no street lights nearby, so I didn't really get to see much. However, I heard some horses in the distance, who wondered about the late-night geohasher. I tried to get a closer look, found them, but was unable to take a photo in the dark. After a few minutes, I left the hash and headed to the Ittersbach Rathaus (City Hall) terminus station. See the markings at the platform on the picture? A few years ago, a man was killed by standing too close to a turning train swiveling out over the platform. After that, numerous warning signs have been added to the station. At the station, I was surprised to meet two other people waiting, one of them drunk. At 23:23, I took the train back home, arriving at 0:18.

Here's the Tracklog (.gpx, .kmz, in Google Maps) of my walk from the station Ittersbach Bahnhof to the Hash and then back to the terminus Ittersbach Rathaus.