Today's hashpoint is located in the town of Eppelheim, a small town next to Heidelberg, population 14,357. It is located on a lot between two houses in the Franz-Holzmann-Straße. While the Google maps imagery of this area was taken 9 years ago, the bird's-eye-view in Microsoft's maps service [1] shows something looking like an empty lot. 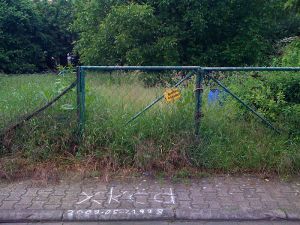 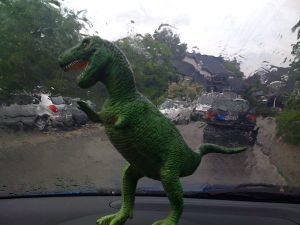 Waiting in the car for the rain to stop. 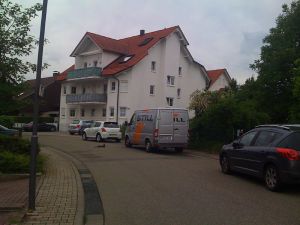 Hash Road. Srs0 and thepiguy are waiting behind the van.

It was Geohashing Day. The idea of Geohashing day is to do something special. As I usually go on expeditions by Karlruhe's excellent tram-train system (or other trains) or by bike, the "special" thing to do would be using some other form of transport. Walking? Well, it's about 12 kilometers, also not that special, since I can also do that in Karlsruhe. No, as I'm currently at my parent's house these days, I had to convert to the dark side of Geohashing and go by car. Also, since I haven't been driving for over a year now, it might be good to see, if still I can.

After about 30 minutes of driving, which went surprisingly well, I arrived in Eppelheim. Just as I entered the town, it started raining. Driving by the Hashpoint, I saw a chalk marking on the road. I parked the car, went to read it. It said: "Back @ 16:00", but it was already disolving in the rain. So I waited in the car, then redrew the marking. At the sidewalk, my GPS showed about 20 meters to go (given as 0.02 kilometers) and the accuracy is 17 meters. Later, thepiguy and srs0 said they reached the Hashpoint from the sidewalk, according to their GPS. The Hashpoint was behind the fence and couldn't be reached. Oh well.

Eppelheim is connected to Heidelberg via tram line 22 (formerly line 2). In the narrow streets of Eppelheim, the tracks run on one side of the road, so trams back to Heidelberg drive on the left side of the road, resulting in some rather complicated situations. Trams in Eppelheim run every 10 minutes during weekdays and every 30 minutes on Sundays and Holidays (like today, Ascension Day). At the tram terminus, I photographed a yellow phone booth for Ekorren. As 16:00 was approaching, I headed back to Hash Road, where srs0 and thepiguy were already waiting. After chatting for a while, we decided to head to a nearby restaurant, 360 meters away. We can has Pub Geohash?

After our meal, we went back to the Hash, took Geohashing mascot pictures. Then, I drove them back to the Heidelberg main station and headed home, arriving at about 19:00.

Here's the Tracklog (.gpx, .kmz, in Google Maps) of me driving from a parking lot near my parent's house to the Hashpoint.

Report by thepiguy and srs0

Thepiguy and srs0 left their apartment in Würzburg at around 9:00 in the morning and decided to walk to the train station instead of waiting for the tram. At the station they purchased the ticket Danatar had so wisely informed them about and then spent the next half hour trying to figure out where to catch out train.

They fortunately had more than an hour to spare, and made it on their train with plenty of time to spare. They spent the train ride looking out the window, eating snacks that thepiguy had brought and reading (thepiguy started reading "The Hitchhikers Guide to the Galaxy" and srs0 was re-reading "Lord of the Rings"). They had to transfer trains in the middle of their voyage but managed to pull off that feat as well. By the time they made it to the Heidelberg train station everything was going perfectly!

The two international adventurers made all of 12 steps out of the train station when they were approached by a pair of German police officers. They asked to see their passports and if they were carrying any drugs. Apparently they didn't respond quite as convincingly as they should have, because the two officers then proceeded to search both thepiguy, srs0 and their bags for any illegal substances.

It wasn't until about half way through the search that thepiguy's little geohashing voice started to speak up (You all know the one; it's that little voice inside your head that tries to convinces you to do crazier and crazier things because "Think of how great the writeup for this will be!") and he realized that this definitely qualified for the Police Geohash achievement!

Neither thepiguy nor srs0 were nervous (since they definitely were not carrying any illegal substances) and the officers were rather friendly, even taking the time to laugh at thepiguy's backpack full of candy. There were a few tense moments when thepiguy remembered that he had his chalk stored in a sharps container (complete with bio hazard warning sign), but everything worked out alright.

Not realizing their train ticket was also valid for the local tram system, they decided to walk the 5km to the geohash. They arrived at a fence on the side of an apparently vacant lot. There was no sign of other Geohashers, so thepiguy and srs0 took their time photographing the area. Fortunately thepiguys's GPS also agreed that this side of the fence was close enough to the coordinated and that no one would have to climb onto private property. They had just finished marking the area with chalk when the first few drops of rain fell. Thepiguy and srs0 decided to make a strategic retreat back to the center of town to avoid the storm, but chalked a quick note on the pavement before they left.

They made it under cover just in time and spent their time wondering how much of their chalk markings were left. They returned after the rain had stopped and waited around (reading and taking pictures of a cat) until Koepfel showed up. We all talked, went to a pub, hung around some more and he even have us a ride back to the train station!

They know how to cook vegetable stew in Eppelheim.