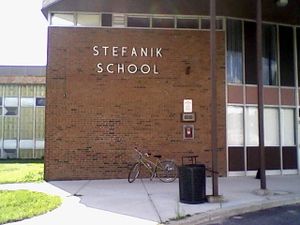 In an elementary school in Chicopee Massachusetts.

This was a 30 km (round trip) urban bicycle geohash. The route went mostly through urban areas, although it started and ended in the suburbs.

This was an adventure for me because previously my longest bike ride was about 10km, and that was almost 30 years ago. I had never owned a bike until this summer, and this summer I have taken some very short rides around my neighborhood, but I needed something to push me to take a longer ride on busier streets.

I'm one of those people who lives in the suburbs and almost never goes into the downtown of the city. I just drive through the city on the highway, and in fact in Springfield the highway is elevated, so one doesn't even drive through the city, one drives over the city. Today I got to see neighborhoods that previously I had only gotten brief glances of, which was interesting.

When I first entered Springfield via Forest Park at around 13:30, I think I was in the South End neighborhood. It was quite vibrant, with lots of people walking (and some biking) and stores doing business, and vans in the street selling food. A lot of the signs, especially on the food vans, were written only in Spanish, and a lot of the conversation was in Spanish.

I continued through the downtown and some other neighborhoods. It was noisy and dirty, and in some places difficult to ride because of obstacles and because I'm still figuring out how to use the bike, particularly the gears. There were many bumps and a few little low-speed tumbles.

At about 3:00 I reached the hashpoint, or rather I reached the building inside which the hashpoint is located. I got as close as I could to the hashpoint, ate a sandwich (not an official picnic geohash, because I had no picnic paraphernalia) picked up a little garbage and took some photos. I forgot to mark the pavement.

Going home seemed to go faster than going to the hashpoint, probably because I was more comfortable on the bike. However, I still hadn't really gotten the hang of shifting gears, and when I was going up a hill about 6 km from home, the chain fell off the gear. I couldn't figure out how to put it back on, so I called my husband and told him I'd get home later than I expected because I had to walk the bike home.

Just by chance, my husband's (former) college roommate is visiting us this weekend. When I called my husband he, our kids, and Former Roommate were out in the car, fairly near me. I started walking the bike home, and they drove over to meet me, and Former Roommate got out of the car and quickly reattached the chain. My husband and I wouldn't have known how to do it. Former Roommate was impressed that I carry baby wipes in my geohashing bag and remarked that baby wipes are great for removing bicycle grease from one's hands.

Then I rode the rest of the way home. arriving at just before 17:00.