On a wine field near Schweighofen

Hm. If I do that, I'll have to pay for a ticket because Weiden is located in KVV, and I'm a cheapskate :P. I think we should be at the hash at approximately the same time, anyway. Fivetonsofflax 18:22, 15 January 2010 (UTC)
To my knowledge, and also according to [1], everything between Wörth, Lauterbourg, Wissembourg, Rinnthal, Maikammer and Germersheim are disputed territories and KVV and VRN tickets are both valid, at least monthly tickets, single tickets might be more complicated. Koepfel talk 18:44, 15 January 2010 (UTC)

Read the small-print: "Für Fahrten von Landau, Bad Bergzabern und Wissembourg in diese Waben sowie für Fahrten in das übrige KVV-Gebiet werden KVV-Fahrscheine ausgegeben." Winden belongs to KVV, so I'd have to pay for Landau -> Wissembourg and back. I think 14:28 is a good time for me to arrive anyway. I guess I'll be at the hashpoint at around 16:00 as well.Fivetonsofflax 19:47, 15 January 2010 (UTC) 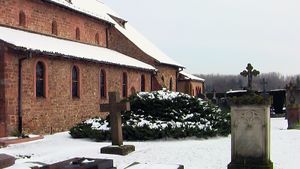 I went from Heidelberg via Neustadt to Landau by train. From there, I took a bus to Wissembourg, France. The ride alongside the Palatinate forest was long but very enjoyable. There was a lot of nice little villages with timber framed houses, the snow-covered landscape was lovely as well. From Wissembourg station, I had to walk a few kilometers to get to the hashpoint. I left the city, crossed Altenstadt and the German border, walked through the fields for a while and arrived at the hashpoint location in a vineyard near Schweighofen. Koepfel said he would arrive at about 16:00. It was approximately 15:30 when I was at the hashpoint, so I sat down nearby and waited for him to arrive. When 16:00 had passed, I supposed he would be late, so I left and approached Schweighofen station. Koepfel arrived there at 16:22. I had to take the train back to Neustadt ten minutes later, though, so we only had time for a short chat and a photo.

Expedition started at 14:00. I boarded the S2 to Marktplatz, to meet someone, who I've missed three times before. At 14:23, the S5 arrived at the Marktplatz. A bit late, but nothing unusual in the crowded inner city. From previous expeditions into the Pfalz, I was used to have lots of waiting time when changing trains in Wörth, so the thought of missing the train didn't even come to my mind. However, while driving through the suburbs of Karlsruhe, I checked the schedule again and realized that time was running out. Then, shortly after leaving Knielingen, where the light rail changes from tram to train voltage and joins the rail tracks, it happened. Our car stopped in the middle of nowhere, and the local train to Winden passed by. I even managed to take a photo of it. But it was obvious, that it would be in Wörth before us and that it probably won't wait. 9 minutes late, I arrived in Wörth Bahnhof, the train to Winden was gone. What now? Give up and take the next train back to Karlsruhe? And miss fivetonsofflax yet again? Or wait for the next train and arrive an hour late? Since I still wanted to try to finally meet him, I took the next train, a Regionalexpress to Winden.

By 15:30, I was in Winden. The next train to Wissembourg would still only leave at 16:08, arriving one hour later. The saturday meetup would be missed anyway. By 16:08, the train to Wissembourg arrived. Finding the hashpoint was easy from now on, finding fivetonsofflax would be more difficult. Despite him arriving by bus (and by foot from Wissembourg), I was hoping to still catch him around or maybe at the stop in Schweighofen for his way back. So while arriving there, I was holding a large xkcd-sign, the one I originally made for the Bad Wildbad Webcam geohash.

And luckily, he was standing right next to the door I exited the train from, saw the xkcd-sign and greeted me. As he wanted to take the next train to Winden (and onwards to Neustadt), we only had little time for one photo and a short chat. While he was on the way home, I kept walking towards the village of Schweighofen, which is about a kilometer away from the train stop.

After a short walk trhough the village, finding the hashpoint was somewhat easy, as I saw fivetonsofflax's footprints in the snow, also the marker was visible from several meters. It was located in a wine field. I added my name to the marker, took photos and a video. Before leaving, I stamped the letters xkcd into the snow, then went on my way back to the train stop. At 17:38, I took the train back to Winden, changed into a train to Wörth, into a light rail to Karlsruhe Kronenplatz and into a tram home, arriving at 19:00.

fivetonsofflax and Koepfel earned the Frozen Geohash Achievement
by reaching the (49, 7) geohash on 2010-01-16 while the temperature was -0.5°C, approx..