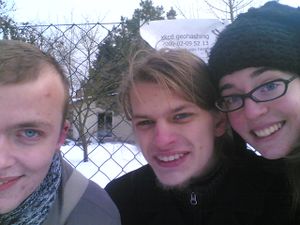 At a fence in Bohnsdorf (almost Brandenburg). Close to a time anomaly.

I will try to go there after my algebra exam, which ends at 11am. The bus stop Waldstr./Stadtgrenze (right at the Berlin-Brandenburg border) is pretty close and it only takes half an hour from Adlershof to get there with bus service every twenty minutes. Might be able to convince some of the other students to come...--HiroProtagonist 22:44, 8 February 2010 (UTC)

The exam was not that pleasant, so it was good I could look forward to going geohashing afterwards. I could convince JUB to come along and he in turn quite literally dragged Kolja along "Hey, come with us" "What? Where to" "A, just come with us. It's fun!" :D We took the S-Bahn from Adlershof to Grünau (yeah, okay, its not that far) and - amazingly - JUB was then able to tell us where to find the correct bus... Has he got something like a sense of direction after all? Fascinating what you can find out during geohashing, hm? ;)

Sitting in the bus only Kolja was able to see the display showing the next bus stop, so he the person in charge of our deboarding the bus... Well... Never trust a drag-along! Suddenly we had passed a boom barrier and everything felt completely different... We had accidentally passed into Brandenburg...

So we got off at Waltersdorf, Gaspumpstation and started discussing whether to walk back or wait for the bus in the other direction. After enormously difficult calculations ("Okay, from the other bus stop we went 2 or 3 minutes by bus which was going approx. 60km/h, so how many kilometres is that???" "60/2 ?") we decided not to walk but to wait for the bus in snow-covered Waltersdorf and to try our luck with hitch-hiking while waiting. After sticking out my thumb and smiling didn't work for a while we made a sign "2 km" letting out potential driver know ho wouldn't have to bear with us for long. Some car drivers smiled, waved at us or sadly pointed at their stuffed back seat, but nobody stopped until the bus came. This time I made sure we got of at the correct stop (well there only was one stop to go) and (thus :D) we did.

Now it was only a few metres walk over icy slippery roads to the hash. When I trudged through very deep snow just to be in a good position to take a picture of the street sign, Jub remarked to the sceptical looking Kolja: "Yeah, she does that kind of thing when geohashing..."

When we came near the hashpoint we were greeted by two loud but rather small and not really convincing watchdogs, that were happily waving their tails while barking at us. We didn't let them deter us and turned our attention to the relevant property. It wasn't easy to match the trees and paths on the Google Earth print out with the naked trees and snow covered ground in reality, but the house proved to be a good clue and so in the end we were pretty sure we couldn't be more than a few metres away at most. While we were poking around in the snow at the fence, the owner stuck his head out of the house and asked what the heck were we doing there? I managed an (surprisingly reasonable) explanation and he was amused but not interested further ("I don't even know what the internet is") so we cannot present you our first Couch Potato Geohash, unfortunately :(

After taking some pictures, we were off leaving behind a hashmark at the fence. At the bus stop we noticed something weird. The bus 263 was going every twenty minutes here (in Berlin), but we were absolutely sure that it was only going every thirty minutes just one stop further (in Brandenburg). Is the time passing slower in Brandeburg??? I still don't really know what to make of this, must be some kind of conspiracy, huh... Well, I dunno, but... Shush! I can't say any more here.

We got on the bus and away from the Brandenburg border as quickly as possible and I even made it in time to my history lecture in Mitte (from where I'm writing this ;) )