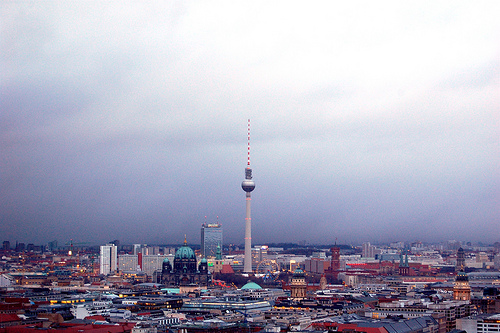 The Berlin graticule is at latitude 52, longitude 13.

It completely encloses Berlin and most of Potsdam. It extends as far as Zehdenick and Joachimsthal to the north, Luckenwalde to the south, Storkow and Falkenberg to the east and Potsdam to the west. It also contains a part of the Spreewald and some nice lakes, and a lot of arable land, particularly in Brandenburg.

Local and visiting geohashers are recommended to join the Facebook group so we can easily notify each other of interesting hashes.

New hashes are announced at 15:30 local time on the previous day, and on Friday for Saturday, Sunday and Monday.

If you actually plan to visit a hash, please create the appropriate wiki page. Others[tm] might be more likely to join in. Subscribe to the RSS or ATOM feeds to be notified of any changes made to this page.

According to Land usage, the chance for your hash to fall into one of the following areas is:

Basically, this means that when being out there, you should go and map those thousands of missing bus stops.

For all expeditions in this graticule, see Berlin, Germany/Expeditions.

2017-06-13 - CamelCase, Fleck - Looks like a maybe-uncultivated field near Klein Eichholz

Retrieved from "https://geohashing.site/index.php?title=Berlin,_Germany&oldid=835244"
Categories:
This page was last edited on 26 March 2022, at 13:15.
Privacy policy
About Geohashing
Disclaimers