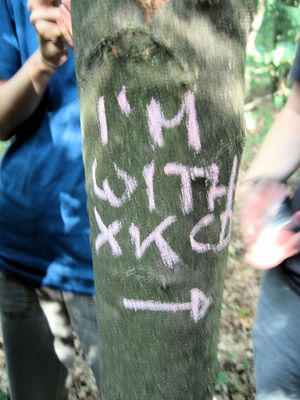 The big Berlin meet-up was planned for a few weeks: the location landed in a forest just off the road near Prötzel, just outside Berlin in Brandenburg to the east.

12 geohashers from 5 graticules (4 graticules if you discount the Canadians).

Did not make it after all:

To explore strange new places; to seek out new games and new achievements; to boldly go where no hasher has gone before... and be the first graticule to get the Migration Geohash (come on, fifty isn't that much! And more than 26 should be even easier...)

Plans are nearly settled. The hashpoint is quite far out, so to make sure we all get to meet, we'll be having two meetings, one at the actual hashpoint, and one later in a more central location to get to know everyone and have fun and beer.

You can make your own way there, or join us in these plans:

For those not going to the main hash, join us for the big meet, starting at UNKNOWN TIME SEE BELOW outside Ostkreuz station at 52.504318,13.467905. Leave your name here though, so we know to look out for you. We haven't decided where to go on to, so write down one of these numbers so you can call us.

Despite none of our drag-alongs turning up, 12 geohashers from 5 graticules migrated to Berlin, defeating raptors along the way to win a tough hash and a fun day's adventure.

The main hash was meticulously planned the night before, with plenty of leeway for late trains. Nine of us met in front of the Berlin Hauptbahnhof at 12:30, sorted out tickets quickly and boarded the planned S5 train towards Strausberg in the far east, beyond the Berlin border and into Brandenberg.

All was going well and we arrived in Strausberg on schedule. dawidi was on the train behind us and quickly overtook us, taking the advance tram as he had to cycle to the hash. So we waited at Strausberg for the planned bus. And waited. And waited. Then the tram left and someone pointed out that the bus was supposed to have arrived first... The bus was late. Ekorren queried a nearby bus driver only to find that our bus was cancelled for the day due to raptor attack or some equally plausible excuse.

Plans were quickly debated and decisions made. We took the rail-replacement bus as far as Strausberg Nord, from where we would walk 7km to the hash. Unfortunately we had no way to contact dawidi, who had cycled on ahead. On the bus, davidc updated the wiki to notify anyone who was going to meet us later - only to discover an edit conflict in the middle of nowhere. pari had got out his laptop and was adding the same warning!

We'd walked a kilometre or so towards the hash when davidc received a call from Hessophanes - he had come by car, met dawidi at the hash and was now wondering why nobody else was there. Fortunately he was able to quickly ferry us the remaining distance in two shifts (though lyx and three others decided to walk the remaining distance).

At the hashpoint, some engaged in woodland frisbee while waiting for the others, more often than not hitting the trees. Does this qualify for a "geohashing wally" achievement? Our geocache was prepared (GC1XWDV "Geohashing Migration 2009"), and inside was placed three travel bugs, two trackable books, a cursed hash coin (#7) and a logbook signed by all the present geocachers. It was then hidden under a pile of rocks at the base of the hash-tree. Cookies were shared and many, many photos taken. The hashscots had a picnic.

Around 16:45 we decided to leave. A few hashers made a desultory attempt at a geotrash geohash and we played fox-chicken-grain with the cars to reach Strausberg Stadt for the trip back. A tram, this time, and then the same S-bahn back into the city.

On arriving back in Berlin, davidc abducted dawidi so he would have a safe place to store his bicycle and belongings. dawidi promised to corroborate the truth of this story, on pain of davidc not letting him have his stuff back. Honour amongst hashers!

A short while later we reconvened at Cafe Oranium on Oranienberger Strasse in Mitte. A much-needed and well-earned meal and drinkies were enjoyed by all and then we slipped away into the night.

This was my first offitial hash. It was a very interesting trip. But the start was a catastroph at oll. My plan was that I meet the rest of the groop at the trainstation Ostkreuz, but i pass the train. Thatswhy i drove by car to Strausberg. There I´d call the others and only a half our later i´d found the groop. The talk while walking to the hash point was really interesting. Thanks at these point for it. So all in all i can say: hashing will go on.

This expedition was on day 2 of a 3-day consecutive geohash: 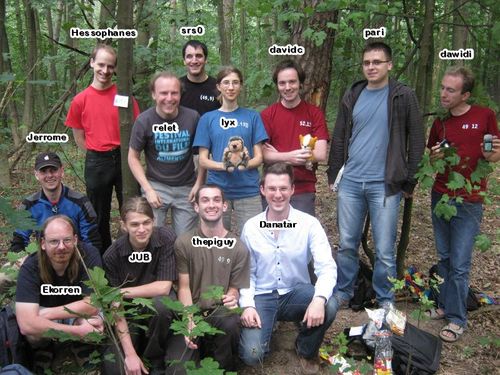