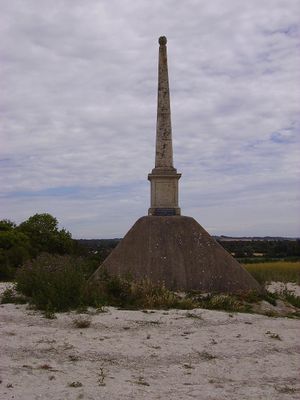 In the corner of a chalky field on top of a small hill west of Little Shelford, about 7km south of Cambridge.

I've been to this field before while geocaching, so I think it's easily accessible. Will plan to go on the way home from work at about lunchtime.

Perhaps a bit more detail would be nice. I don't normally take six hours to cycle 10km; rather, I had to put in an appearance at work in the meantime (that's where the car came from, too). This would have been a nice hash to walk to from home, but I have a statistics assignment due at 5pm tomorrow which I (ahem) haven't actually started yet, so I didn't really have the time. So I went on the way back from work instead.

This hash was (again) in a field, but I'd been here before while geocaching, so I thought it would be pretty accessible. I parked the car in a lay-by on the road at the bottom of the hill, then walked up a public footpath between fields and past a little area of woodland. Right at the top of the hill is an obelisk, which has an interesting story behind it. It was erected in 1739 by a local man in memory of his friend. The two men used to meet on this hill for country walks, geohashing not having been invented then, and they made a pact that when one of them died, the other would erect a monument in his memory. Accordingly, when in 1739 Mr Gregory Wale indeed died, his friend Mr James Church had this stone erected. The inscription records that Mr Wale was

Justice of the peace for this county, Deputy Lieutenant County Treasurer, Conservator of the River Cam... an advocate for liberty, a good subject, an agreeable companion, a faithful friend, an hospitable neighbour, and in all parts of life a useful member of society.

I'm a little surprised that he had time for any country walks.

Hidden in the woods near the obelisk is a geocache, which I'd already found, but went to find again. It turned out to be 260m from the hashpoint, which beats my previous hash collision honourable mention of 370m.

I then went to find the hashpoint itself, which was in a corner of the field. Handily, there was a ten-metre-wide strip of unplanted field all round the edge, so there was plenty of room to avoid trampling crops. The soil was baked hard by the hot weather we've had in the last month. It's very chalky soil around here so it appears very pale grey on the photos -- the colour and texture of concrete at the moment!

The actual hashpoint turned out to be a couple of metres inside the field, so I didn't have to go scrambling around in the undergrowth at the edge. Unfortunately, although I very carefully brought several sets of rechargeable batteries with me, only one set turned out to have any remaining power, so I wasn't able to use the GPS and the camera at the same time.

A few photos of the hashpoint and the view were taken, then I wandered back to the car, enjoying the hot sunshine and the insect life around -- mostly crickets and white butterflies.