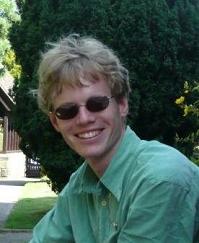 Hi, I'm Ben, I live in Cambridge, UK (the city as well as the graticule), and I've been geohashing since the beginning of 2009, on and off. I've been to about a hundred hashpoints now, most of which have been in my own graticule, with some in nearby grats and a few further afield, usually while on holiday. I use a Garmin eTrex GPSr, which at least makes it possible to go geohashing even when the hashpoint is in the anonymous middle of a field (which it frequently is, around here). I can often be found inhabiting the wiki (and sometimes IRC), so please do say hello -- especially if you are in the UK and there's a chance we might actually be able to meet up at a hashpoint!

From 2007 to 2012 I was studying full-time. However, since it's always nice to have somewhere to live and something to eat, I was also working full-time. This added up to quite a few hours each week, so my geohashing expeditions have been rather sporadic -- if I have lots of free time I'm happy to go to most points, but if I'm busy only the nearby or interesting ones get a look in.

I am, however, trying to cycle more. Geohashing is a fun way of selecting somewhere to go on a cycling trip, so I'm hoping that I'll be able to do a few more than I have up 'til now. I recently ticked off one aim -- a 100-kilometre cycle ride. The first couple of hours were fun but after that it was a bit of a slog. Now I just need to concentrate on getting better at it.

Aims for the near future

I don't mind driving to the odd hashpoint, but would like to make more of my expeditions by bicycle or on foot. The proximity of the prime meridian means that quite a few of my expeditions are double hashes, so one obvious target is an all-bicycle triple hash -- I don't think this has been done yet by anybody. I had an attempt at this on 23 April 2009 but wasn't fit enough to make it to the third one in the time I had left. My other main aim is to geohash in all eight graticules around Cambridge to claim the minesweeper achievement -- this will involve hashing in the North Sea, though, which may take some thought. I'd like to combine this with the cycling and make bicycle expeditions to the surrounding graticules as well -- so far I've only managed the Cambridge and Northampton ones.

I have a few ongoing minor 'projects' on the wiki. I started the United Kingdom page with the idea that similar pages might be good summaries of the activity in countries or regions, but these are rather heavy on the maintenance, so I'd like to do something easier with this page. I also continue trying to work through all the uncategorised and unused files on the wiki, and in the process I try to weed out any duplicated images for deletion, and generally correct typos and tidy things up. I also need to get round to sorting out the map gizmo which draws all the Google maps for meetup templates and the like -- I have a list of extra functionality I'd like to see. I also need to (cough) finish writing all my expedition reports and uploading the photos... oops...

I've met eleven other geohashers so far; all of these meetups have been at least slightly planned beforehand. In addition, MrsBenjw has accompanied me to a few hashes but declines to get involved with the wiki. 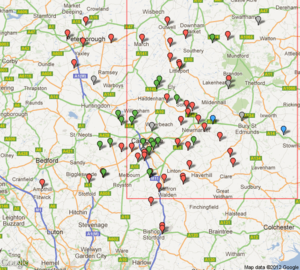 My closest geohashes - by car (red), bike (green), public transport (blue) and unsuccessful (grey). Home is at the centre; my graticule is outlined. 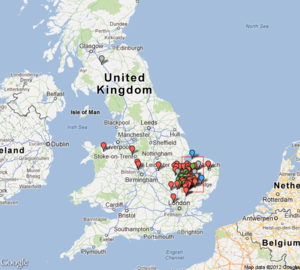 Statistics are below, but here's an executive summary: in total I've visited 116 hashpoints (plus 3 retrohashes) and failed to reach 10 others, over 98 separate expeditions. Because of the proximity of the prime meridian, which mirrors hash coordinates, several of my expeditions have been to two hashpoints; many of these even by bike. (I pay for this at other times when both graticules have a hashpoint very far away.)

Retrieved from "https://geohashing.site/index.php?title=User:Benjw&oldid=126309"
Categories:
This page was last edited on 10 July 2019, at 11:35.
Privacy policy
About Geohashing
Disclaimers