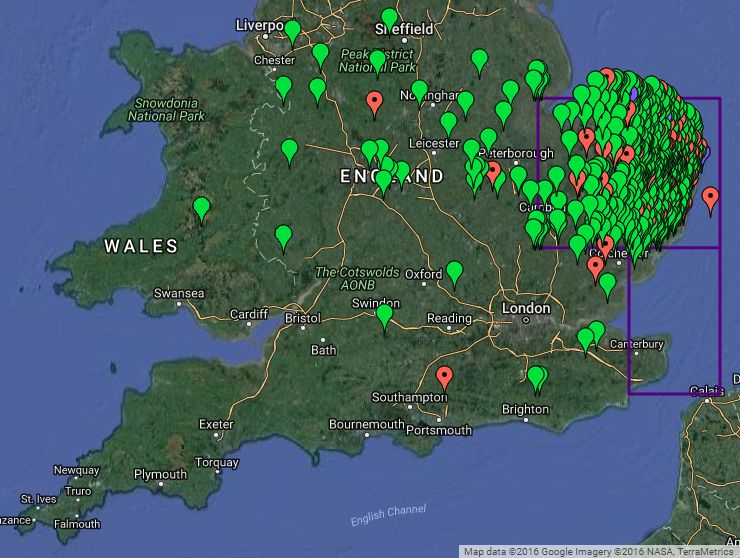 Sourcerer lives in and likes likes 52,1 but he's seriously considering moving to 52,-1 because there are so many ocean hashpoints locally. 52,-1 is the only UK graticule surrounded by adjacent graticules that are mostly land.

Have all the geohashers been "Nerd Sniped"?

My user name is a play on words based on computer source-code and is a tribute to controlled folly. I'd should have chosen Sourcerror but thought of it 10 years too late.

I enjoy computer programming and in 1972, wrote an implementation of Conway's Game of Life in BASIC. The virtual creatures were printed on a paper roll by a mechanical teletype. Those were the days!

In 1976 I taught programming to school kids. We used Algol! We filled in coding forms and submitted them to be punched onto cards for the overnight run. The next day we'd get the error message print-outs or occasionally a successful run.

Since childhood, I've loved going out at night. I seem to have above average night vision. I love it when it's so dark you can almost count the photons and the night vision is grainy and a bit sparkly. This might explain my love of geohashing - stealthy, often unobserved, at night. If possible, to save fuel and the planet, I visit pairs of hashpoints each side of midnight. This is great for wildlife spotting and the roads are empty. I have a spreadsheet to calculate when to set out in order to arrive at the second hashpoint at midnight. I get driving times from Google maps and estimate walking times from the UK Ordnance Survey maps available on-line using Bing maps. I note that USA time zone citizens can't do this due to the algorithm. It would be good if that rule could be tweaked.

Like golf and most other human activities, geohashing is totally pointless (in fact it is one of the few activities that has got an identifiable point) and it's much more fun than geocaching or golf. Many hashpoints are in the middle of a muddy field. These are a bit worthless but if there's some other attraction or challenge, I'm more likely to make the effort. In 2015 Sourcerer discovered a previously unsuspected competitive streak leading to a serious increase in geohashing activity. For some grand scale folly, see Neil's Big Walk below.

The terrain in the east of England is almost flat and often quite dry. Google earth has been most useful for planning expeditions. Usually it's easy to identify hashpoints which are on private land or inaccessible for other reasons. After 100 expeditions, my success rate was 86%. In late August and autumn, most of the fields have been harvested but not yet re-planted so they are easily accessible. In the other seasons, it's often wetter and access is less easy. Hard frozen ground in deep winter is really good for geohashing.

Another folly is to walk from Cape St Vincent (Portugal) to Istanbul (Turkey). Starting in 2003, after 183 days walking and 3798 km, Neil had reached Vicenza in the north of Italy. The walk is about 50% complete. Neil is not seriously expecting to complete this walk but that is all part of the folly. He set out with his mother and sister. Both have since died. His mum reached a ripe old age. His sister died of cancer but she walked 2567 km before the cancer overcame her. She reached France. Geohashing is a good way to keep fit enough to continue with the big-walk stages.

Here are the walk details and photo gallery. You can download a [KML file] of Neil's walk for use with Google Earth. These paths are also logged at [WikiLoc].

This is what Google Earth looks like if you download the KML file. It makes more sense when you zoom in. 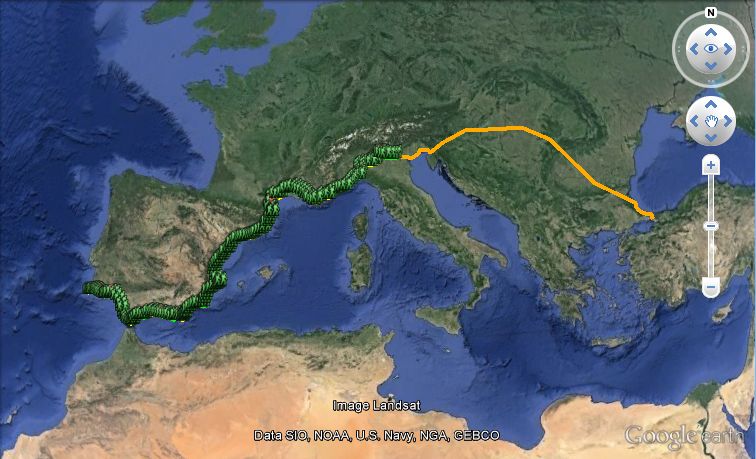 Here I pay tribute to awesome contributors to geohashing. If there were Oscars for geohashing, in no particular order, these would be my nominees.

Retrieved from "https://geohashing.site/index.php?title=User:Sourcerer&oldid=827933"
Categories:
This page was last edited on 18 January 2022, at 19:25.
Privacy policy
About Geohashing
Disclaimers