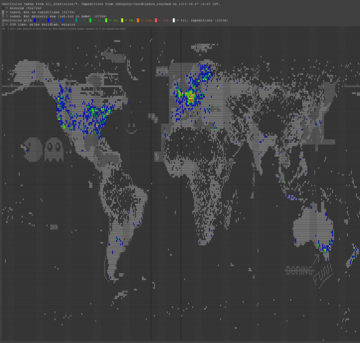 World map of All Graticules

User:dawidi has written a geohashing statistics generator. It reads some wiki pages, and currently outputs a few static html pages. Thanks to the folks on #geohashing for their positive feedback and constructive criticism :)

If you're curious, the program is written in C#/.NET 2.0 without any extra libraries. It's a scheduled task on my server, updating the statistics once a week, on Tuesday at 10:45 CE(S)T.

Shows which graticules have been named, and which have their own wiki pages.

Graticule names and positions are read from the world region pages at Category:All graticules. A graticule that doesn't have a page is considered to be sea and colored blue if it has its own lat, lon in the name.

(Notice the graticules have links and title texts.)

Shows graticules colored by number of documented successful hash visits (from Category:Coordinates_reached). The color gradient used is nonlinear, so differences between graticules with few visits are easier to see. Unsuccessful expeditions are not counted, as those categories seem to include a lot of planned expeditions that did not take place after all.

Also includes the named and named/sea graticules from the world region pages at Category:All graticules in a brighter gray.

(Notice the graticules have links and title texts.)

Shows bar graphs of the number of successful visits per week, both for the entire globe and for each continent.

The continent "outlines" are, for the moment, simply 6 rectangular blocks of graticules covering the entire globe (see bottom of the page for the exact sizes), so the breakdown may not be useful for e.g. Antarctica, and may assign some obscure regions to the wrong continent. The edges were chosen such that all 2008 expeditions are counted for the correct continent. The 2009 expeditions in Israel are currently counted for Africa, but I'm too lazy to refine the region borders at the moment.

(I know it lacks a scale, but look at the title texts for numbers.)

Generated from a user-contributed list at Maps and Statistics/User Fractions, it's a rendering of geohasher locations around the world, but mapped onto one square graticule, so people who live in the same corner of their respective graticules, but in an entirely different graticule, will end up close to each other. I suppose distances on that map will indicate how likely it is for people to do expeditions (to hashes near their homes) on the same day, not how likely they are to meet.

Yes, it's difficult to explain and a ridiculous concept... the idea arose from regularly attending the zbot summoning ceremony in #geohashing, after which we usually start voicing our opinions about the new coordinates and wildly disagreeing about whether they are "good" or "bad", depending on where each of us lives relative to the grid :-)

An age-sex pyramid graph showing the distribution of age groups among geohashers (at least those using valid ASG templates).

After complaints that the categorising of hashers into m and f was too restrictive, the script now accepts ASGs with other values for the gender parameter as well and lists them in green :-)

Also, people who give their age as negative (or their birthday as a date in the future) or who are over a hundred years old will be listed under "invalid age", independent of gender. (May be changed if time travel is implemented or the Old Geohash record reaches 90.)

If you live in a difficult graticule with inaccessible terrain or ocean, this on-line calculator is handy for working out probabilities.

For example, the Norwich graticule is 57% land so the daily probability of a land geohash is 0.57. In a 30 day month, the probabilities of getting land hashpoints can be calculated.

Interactive Map of All Expeditions 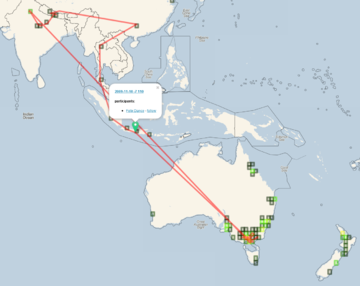 Shows a slippy map with all graticules that have expedition reports. The colour scheme represents number of attempted expeditions.

If you want to link directly to regions on this map, it also supports parameters. (Example)

Retrieved from "https://geohashing.site/index.php?title=Maps_and_statistics&oldid=139912"
Categories:
This page was last edited on 5 April 2016, at 21:53.
Privacy policy
About Geohashing
Disclaimers