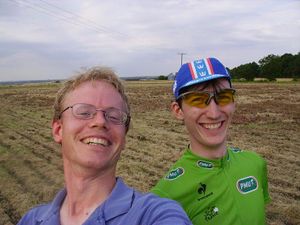 In a field just off a track in Boxworth, a village west of Cambridge. The hash itself should be accessible if the field is not full of crops.

Ben plans to cycle up from Cambridge in the late afternoon, once the temperature has dropped a bit (it's been 30 degrees this week). Probably route is up the guided busway from north Cambridge to Longstanton, then down the road to the Cambridge graticule hash. Then on to Bar Hill, and up the footpaths and bridleways through Lolworth to Boxworth. Once this hash has been attempted, the return route will probably be through Knapwell and Hardwick and back into Cambridge.

The Odyssey began the night before, when, cleaning my chain in preparation for an epic cycle ride, I throw a crucial component down the drain. Thus I had to wait until the bike shops opened on Sunday before departing, delaying me by an hour.

However, depart I did, pacing myself to roll along at an average of 22kph through Bicester, Milton Keynes, and Bedford (and about 30 villages). I'm pretty sure I did 100 miles because I turned my GPS off by accident for 15 minutes, and it still read 155km by the time I got to Boxworth, only half an hour or so late. This is the longest cycle ride I've ever done by a decent margin, before I've even finished my journey - although I don't qualify for XKCD-100 because, curses, it wasn't a Saturday.

When I got to Boxworth I met Benjw and we walked to the middle of the appropriate field, where I ate my second egg mayonnaise sandwich of the day and managed valiantly not to throw up. However, this doesn't qualify for a Picnic because I didn't have any of the accoutrements. Curses.

We proceeded to roll gently to the second hash which was in a rather less harvested field, so we had to leave our bikes and proceed on foot, before I went to Cambridge and caught the train to stay with my cousins.

For me the odyssey also began the previous day, albeit in a more relaxed way. I looked up the hashpoint coordinates for the weekend on Saturday morning, and realised that not only was Sunday's hash close to Cambridge, but Monday's was as well. Furthermore, it was close enough to the Prime Meridian to make it a double hash by bike. I've done this a few times and it's good fun. Not expecting very much response, I left a note on the graticule page to say that I'd be going, and went to a friend's wedding.

Returning from that at about midnight, I was chuffed to bits to find that someone had actually replied. A small flurry of emails followed, and it was all arranged -- I would do the hashpoints in the opposite order to that originally planned, and Ali0sha would meet me at the first one at 5pm, and then would cycle back to Cambridge before catching a train. I did weekend chores and got the bike ready. At about three-ish it occurred to me that I had not had lunch yet. This might be a problem for a long cycle ride. Curry and rice was swiftly put on to cook, and lunch was partaken of at about half-past three, the time I was originally planning to leave. I eventually left at nine minutes to four.

I started by heading straight into the centre of Cambridge, and when I reached the river, turned right and headed west out of town. This is a pleasant route, but just after leaving Cambridge the road goes up a large hill. Well, we call it a large hill; anyone from Vancouver or southern Germany (or, indeed, most of the rest of England) would call it a slight incline. We don't, as I may have mentioned before, have hills around here. I wheezed up the hill with the bike and my knees making alarming creaking noises, and stopped for a bit of a rest at the top, where I accidentally gave a foreign tourist the wrong directions to the American Cemetery. I hope he found it.

Knees rested, thirst slaked and incline conquered, I proceeded onwards at a pleasing speed of 26 kph to a geocache I intended to find en route to the hash. The old road out of Cambridge passed through several villages; it has now been bypassed by a dual-carriageway, turning the old road into an ideal, quiet route for cycling and for hiding geocaches. This one was based on a fun logic puzzle and was hidden in a patch of trees between the old road and the new one. I rode along a closed and grassed-over section of the old road to get to it -- fun, but a bit bumpy.

After that it was a simple matter of heading further along the road, turning right to pass through Knapwell, then turning right again to enter Boxworth. However, as I cycled along I passed a bridleway sign, and the bit of my brain that equates "mountain bike" to "off-roading" pulled the brake lever. I checked the map and yes, this was a short-cut. I turned up the bridleway.

Fifty metres on, the tarmac ended and I was on a dirt surface. Not too bad, but we've recently had a long period of rain, and then a long period of hot sun. Tractors had been up this track and their ruts in the mud had set like concrete. I bounced along for a bit, and then found an extra-big hole which, against all the odds, was still full of liquid mud. I cycled through it. Of course.

This was the best bit of the ride, really. Soon the track turned into a field, and then into another track, and then into yet another track which actually went through the farmyard, and finally into a paved road once more. This bit edged slightly downhill, and I reached my top speed for this trip of 44 kph, before arriving in Boxworth village. I turned left by the phone-box, headed through some woodland, crossed a ditch and -- hurrah -- there was the field I was aiming for. I was one minute early, but there was no sign of Ali0sha, so I went and sat on the hashpoint, took some photos and looked at routes to the next hashpoint. Total distance cycled was 20.0 km.

After some time I reached that awkward moment when one thinks "should I ask if he is nearly here?", waited a little more, and finally sent an SMS to Ali0sha. Of course, I'd timed that awkward moment perfectly, as within minutes he had phoned back, saying that he was in the village. I cycled back out to the main road to meet him, and we shook hands before returning to the hashpoint, taking photographic evidence and, in Ali0sha's case, collapsing to the ground. I think he had cycled a little further than I did to get here. Once the ability to stand had been regained, we chatted, ate sandwiches, and eventually left the hashpoint at ten minutes to six, to cycle onwards to the 52,0 hashpoint.