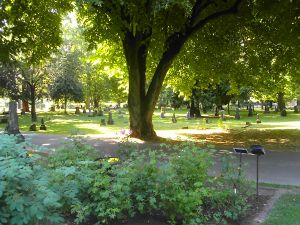 The area around the hashpoint.

Near the center of Lone Fir Cemetery, in Southeast Portland.

Jim's thought about it, but couldn't think of anything to make it really interesting, so he just went.

Michael5000 woke up and checked the hashpoint. "Holy cats!" he exclaimed to Mrs.5000. "We're going geohashing!" And they walked down the street to the hashpoint in nearby Lone Fir Cemetery.

Jim finished up the chores he had to do and headed out. He first went in search of blueberries, but took a wrong turn on the back roads he was taking and ended up going the long way around. However, around one turn he ran into a graveyard. Since he was still in Washington County, I guess that means that this expedition qualifies for his "Graveyards of Washington County" series. He also got to take a picture of Mount Hood since it was being quite visible.

He got some more blueberries, and then put them way in the back of the car so he couldn't snack on them on the way, resulting in a loss of 20-30% of the original amount. He then headed for Portland, but was struck by how heavy the traffic was.

However, it thinned out, and he eventually made it to SE Portland. He didn't find Stark Street, but finally decided to just follow the GPS direction arrow and see what happened. I eventually found myself at Lone Fir, which seems to be a Pioneer Cemetery, whatever that is. (I noticed an article in the paper a few days later about the fact that funds to maintain these cemeteries has become scare.)

I wandered around for a while looking a grave markers, then let the GPS lead me to the hashpoint. There was a pioneer rose garden at the "zero" distance point, so I stuck to the outer edge at 10 feet or so. There actually were a number of graves close in, so a number of folks may have a Coffin Potato.

I took some pictures, wandered a little more, and headed home.

Forkbomb was poking around on his phone to avoid making eye contact on the train, and discovered that not only was the hashpoint just across the river, it was in a cemetery. Forkbomb likes cemeteries.

As near as I could tell with all the multipath interference, credit for the coffin potato achievement goes to the the Hill family. They look to have been woodworkers from Illinois, though their web presence is sadly lacking.