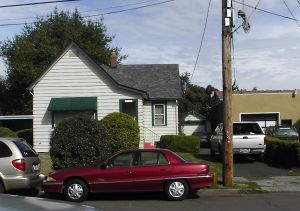 The hashpoint is at the end of the driveway, right outside the garage door.

Having a free morning and one of the last dry, warm days of the year, it was a no-brainer to gather bike, camera, GPS gadget, and hashcot, and hie myself down to Sellwood.

The hashpoint is at the end of somebody's driveway. I'm claiming it under the following house rule, which I have noticed other people tacitly using and which seems perfectly reasonable to me:

It was a 12.1 mile round trip on the bike, southward winding through the neighborhoods and homebound up the Willamette River Trail and eventually through the rose gardens in Ladd's Addition.

Jim went out to Sellwood to see what he could see. He arrived there, and it was late. He eventually went up to the door to knock to see if he could get permission to approach the garage, but didn't get any answer. So he gave up and went home, forgetting that he was going to go hear music at the Edgefield since he was on that side of town.